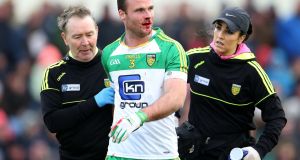 Donegal defender Neil McGee will look to fast-track the GAA’s disciplinary process in an effort to make himself available for Sunday’s visit of Roscommon to Letterkenny for round five of the Allianz Football League.

The GAA’s Central Competitions Controls Committee (CCCC) proposed a one-match ban for McGee for his involvement in incidents in the match against Kerry in Tralee last Sunday.

McGee himself was forced off the field with a broken nose although he did resume for the second half.

The CCCC deemed his action to be behaviour dangerous to an opponent and charged him with a Category Three offence.

Both Kerry and Donegal are also considering an appeal on the €7,500 fines each, handed down after Kerry’s five-point win was overshadowed by numerous melees over the 70 minutes – particularly in the a first half, when two red cards and two black cards were handed out.