Monaghan pip Donegal in a match to forget 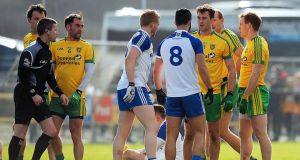 In one of the worst games ever witnessed in the county, Monaghan were worthy winners against Donegal in O’Donnell Park, Letterkenny.

The very good attendance of around 5,000 were expressing their discontent midway through the first half as Monaghan pulled all their players back behind the ball and Donegal looked clueless trying to break it down.

When Monaghan got the ball, the Donegal bus was then parked around the ‘45’ and by half-time supporters were wondering if they could get their money back.

But if they thought the first half was bad, then the second was even worse as Donegal,with the wind at their backs, could only manage one score - a fisted goal from Michael Murphy after 43 minutes.

That score put the home side two points ahead, 1-4 to 0-5, but it was Monaghan who had the stomach for the battle for the remainder of the game and they notched four points before Padraig Hughes blew the final whistle.

Those points came from the boot of Paul Finlay (two frees) to level matters with 13 minutes left and then four minutes from the end Monaghan ’keeper Rory Beggan landed a free from the 45m line to edge them in front.

In added time Fintan Kelly sealed the victory to bring an end to a miserable day for the home team.

It had looked good for Donegal early on as they led by 0-3 to no score after 11 minutes with Michael Murphy (2) and Patrick McBrearty notching frees.

However, by half-time Monaghan had fought their way back on level terms thanks to points from Kieran Hughes (the only point from play in the opening half), Conor McManus and Finlay frees.

Monaghan lost Conor McManus to a black card ten minutes before the break, but the loss did not affect the Farney men as they had a much greater desire on the day.

Donegal manager, Rory Gallagher, said that he made a lot of changes because he felt players yellow carded would be sidelined: “The lack of scores was a concern.

“In the first half after going up 0-3 to 0-0 we only got one more point from play and it wasn’t good enough.

“ Monaghan made it very difficult for us to break them down and we knew that was going to be the case. We were too predictable and easy to close down.”

For Monaghan manager Malachy O’Rourke it was an important victory but was not a defining moment for league survival, he said: “Defeat today wouldn’t have meant that because we go out and try to take every game on its merits, we try and get a performance in all then games and try to win them all.

“A defeat today would have looked like that but now depending on how the other results go, there are a lot of teams on the same number of points and it is all to play at both ends of the division.”

1 Royal Portrush: Golf clubs ‘in real distress’ as eyes turn to 2021
2 Rodgers shunned by some family members for leaving Celtic
3 Colin Kaepernick’s exile is too fresh for NFL to speak out on US protests
4 Ken Early: Why international football is fading into obscurity
5 Connell losing touch with club championship is real tragedy of Normal People
Real news has value SUBSCRIBE