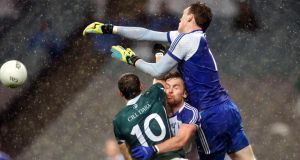 Monaghan eventually secured the last spot in the All-Ireland football quarter-finals, just about splashing then smashing past Kildare on a desperately wet evening to set up a date with All-Ireland champions Dublin back in Croke Park next Saturday afternoon.

It took extra-time, all played out under pretty miserable conditions, yet made for a particularly memorable night for a Monaghan team who hadn’t won a championship match in Croke Park since 1930 - when they also beat Kildare in the All-Ireland semi-final.

The pivotal score in extra-time was a goal from Chris McGuinnness, brilliantly set up by Kieran Hughes, and after that they withheld some late pressure from Kildare to hold out for the two-point victory - and end the 84-year wait for a championship victory in Croke Park.

It was no less than Malachy O’Rourke’s team deserved, as the game first appeared to turn Monaghan’s favour after a stunning Viney Corey goal midway through the second half, which pushed Monaghan ahead a crucial stage.

However, that was short-lived, as a succession of scores late on forced extra time. Young Monaghan sub Jack McCarron then helped swing the game in Monaghan’s favour in extra-time with an inspiring point from play

Two first half goals from wing back Emmet Bolton had helped Kildare into a three-point advantage at half-time. Bolton’s first effort was a thunderbolt finish, on 19 minutes, set up by Alan Smith. His second, on 24 minutes, came off a Monaghan mistake, when Fintan Kelly dropped the ball, allowing Cathal McNally to pounce for Kildare, with Bolton calmly finishing into the net, this time with the fist.

Before that the sides were level three times inside the first 12 minutes, both teams clearly struggling to comes to grips with madly slippery surface, and ball. Padraig O’Neill, Alan Smith and Eoghan O’Flaherty also added first half points from play for Kildare, who were played with a little more tact in the difficult conditions.

Monaghan were able to respond to Kildare’s goals thanks to a succession of frees, and ended with half with three each for Conor McManus and Paul Finlay. Two points from play meant they were just three points in arrears, 2-5 to 0-8, at the break.

Bolton was than black-carded three minutes into the second half for dragging down Stephen Gollogly - and clearly wasn’t happy with the decision.

Conditions improved slightly, but not necessarily the football. Eamonn Callaghan had a great chance of adding a third goal for Kildare, with only the goalkeeper to beat, but chipped his shot off the post, and wide.

Monaghan were lifted by this, scoring the next three points - from McGuinness and then a free from McManus and Finlay - to close the gap to one, 2-6 to 0-11, with 46 minutes on the clock.

Then came Corey’s smashing goal, on 49 minutes, when McManus set him on the run, before he unleashed a stunning shot that swept into the top right corner, as Kildare goalkeeper Mark Donnellan looked on in sheer disbelief.

Now, their tails clearly up, Monaghan tried to push ahead, but couldn’t quite drop Kildare could throw at them. They closed it back to a one-point game, on 63 minutes, thanks to Alan Smith, and then levelled it up two minutes later, thanks to Eamonn Callaghan.

That made for frantic final five minutes of normal time: first, Eoghan O’Flaherty appeared to give Kildare a winning edge, with an excellent point just at the end of normal time.

Still, there was just about time for Monaghan to force extra-time - McManus winning a free just in front of goal, and happily converting himself, to leave it 1-13 to 2-10 on the whistle, thus forcing the extra 20 minutes.