Fermanagh notch surprise win over Derry as Donegal, Armagh and Down also triumph 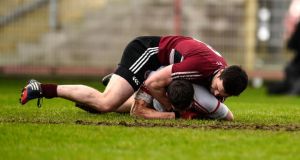 Patrick Quinn’s 43rd minute goal ended the resistance of 14-man St Mary’s at Omagh, and the home side hit six unanswered points in the final quarter to run out 1-12 to 0-3 winners.

Connor McAliskey marked his first appearance of the season with three early points, but after a bright start, they failed to score in the final 18 minutes of the first half, with Emmet Bradley narrowing the gap to three.

But the students had James Morgan, already booked, send off on black/red cards. St Mary’s did have a chance to go level when they were awarded a penalty, but Jerome Johnston’s kick was superbly saved by Mickey O’Neill.

The Red Hands responded instantly with a palmed goal from Patrick Quinn for a six points advantage. The depleted visitors had little resistance left, and substitutes Sean Cavanagh, Kyle Coney and Peter Hughes all landed points, along with new boys Rory Brennan and Cathal McShane.

Sean Quigley’s goal five minutes from the end earned Fermanagh a surprise 1-9 to 1-7 victory over Derry in Sunday’s tie at Brewster Park. Derry were understrength but recovered from a bad start to lead 0-5 to 0-4 at half time and they looked well in control after Benny Heron’s 45th minute goal gave them a two-point lead.

However Fermanagh battled on and Quigley toe-poked the ball home at the near post in the 65th minute to keep the home side in the hunt for a semi-final place from Section B. Derry lost forward Daniel McKinless to a black card for tripping an opponent in the 29th minute of a laboured first half.

Fermanagh did start brightly and led 0-3 to 0-1 after 10 minutes, Eamon McHugh and James McMahon with stylish, well-worked scores.

Both sides struggled to get any fluidity into their play but Derry drew level with two points inside a minute from midfielders Mark Craig and Mark Lynch. Lynch’s 35m point edged Derry in front for the first time and they held onto the slender lead until half time.

Heron jinked inside his marker to blast the ball left-footed high into the roof of the net for Derry’s goal after 45th minute. The Oak Leafers hit a number of poor wides and didn’t register a point in the second half until cornerback John O’Kane popped up wth a fine score in the 58th minute.

Points from Paul McCusker and Declan McCusker kept Fermanagh in touch and Quigley managed to keep Barry Mulrone’s shot in play before squeezing the ball home low inside the near post. Aidan Breen’s point a minute later ensured a surprise victory for the Division Three side over last year’s Division One finalists.

Two second half goals helped ease 14-man Armagh to a 2-11 to 1-4 victory over Antrim at Creggan.

Armagh’s Jamie Clarke was dismissed for a second yellow card offence in the 63rd minute but the Orchard men already had victory safely secured by that stage.

Armagh played with the strong breeze in the opening half but took time to break down the packed Antrim defence in the early stages, however Armagh tacked on three unanswered scores for 0-6 to 0-2 lead at the break.

A Clarke free extended the lead, and it was the Armagh talisman who turned provider for Oisin McKeever to raise the first green flag of the game. His first effort was well-saved by Antrim keeper Chris Kerr, but the rebound fell kindle for McKeever to tap home at the second time of asking.

Armagh’s second goal arrived when Stefan Campbell unselfishly set up Forker to fist to the net for a 2-11 to 0-4 lead in the dying seconds, with McGourty’s penalty conversion proving the last action of the game.

Donegal’s oldest player Eamon Ward celebrated his second ever intercounty start with a goal on the stroke of half-time that put Donegal on their way to a 2-16 to 1-8 victory over Queen’s University.

The goal left Donegal ahead by 2-7 to 1-3 at the break as Rory Gallagher played a much more experienced side than that against Derry a week earlier. Christy Toye and Odhran MacNiallais dominated around the middle, giving Donegal a solid platform.

That platform saw Martin O’Reilly finish their first goal on six minutes and they led by 1-3 to no score when Ciaran O’Hanlon struck for Queen’s first score - a goal - on 11 minutes.

But with MacNiallais and Toye dominating and the driving wind and rain at their backs, Donegal were on the front foot immediately.

The same pair combined for the opening point of the second half as Donegal continued to stretch the margin. Queen’s did hit some good long range points with the elements, but Donegal finished strongly, getting the final three points to put themselves in contention for a semi-final spot, as the win leaves them level with Derry in joint second spot.

They meet the section leaders Fermanagh in the final series of games on Wednesday night and the calculators could be needed to decide the winners.