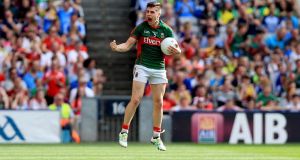 Mayo’s Lee Keegan celebrates at the end of the game. Photo: Donall Farmer/Inpho 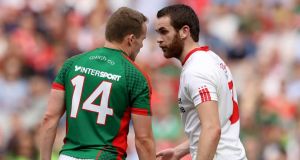 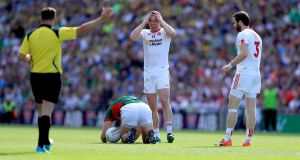 Mayo are through to a sixth All-Ireland semi-final in a row, mostly on the back of the bits and pieces they learned on the way to the first five. They beat a Tyrone team that were a match for them in every department but experience. When it mattered most, Tyrone couldn’t turn to Seán Cavanagh to bail them out again, the old reliable having seen a second yellow card in the 58th minute.

Tyrone will reflect on a game where they had enough about them to be thereabouts without the extra bit of nous you need to be truly there. The sides were level at 0-10 apiece as the clock turned for 50 minutes – from that point to the final whistle, Tyrone kicked five wides to Mayo’s one.

Two of those wides came from defenders, two more off the bench, the other a 55-metre effort from goalkeeper Niall Morgan who had already missed two beforehand. Mayo kept them at arm’s length and took their chances with who they allowed to shoot.

It was by no means epic stuff. Compelling more so, without ever turning into what you’d call a great game. But Mayo been through enough great games by now to know the worth of them.

Ultimately, this was a triumph for Stephen Rochford and his management team. For as long as Mayo’s 2016 form remained patchy, the wisdom of the winter putsch against the previous management would have been questioned. It would have looked a lot of fuss to make for no obvious improvement.

But on Saturday, the Mayo gameplan was perfectly tailored to the demands of the Tyrone defensive system. Instead of perpetually sending pods of three and four players to handpass through a forest of bodies on the Tyrone 45 and risking getting gummed up in the works, Rochford picked Alan Dillon from the start and got him to keep playing first-time kick-passes into Andy Moran at full-forward.

It was a bold strategy in that it trusted Dillon to be quick and accurate and Moran to make the passes stick. Not all of them did, inevitably enough. But with Dillon quarter-backing, it meant that Mayo very rarely had men caught ahead of the ball so when Tyrone broke at pace, Rochford’s side had the population reserves to handle it. Tyrone scored just one point from a counter-attack all day. Job done.

At the other end, Aidan O’Shea and Cillian O’Connor kept their end up. O’Connor was urgent and vital, taking responsibility always. He landed one bomb from Fairview Park after 19 minutes and jinked his way along the endline for another five minutes later.

O’Shea was in the sort of mood where he veered between being the best player on the pitch and getting too caught up in being the star of his own movie. His opening score after seven minutes was a stone-cold beauty with the outside of his left boot from 50 metres. He set Moran up for a knock-down point on 13 minutes and O’Connor for another soon after.

But as the scores grew harder to come by towards the end of the first half, so O’Shea got crankier and less effective. He got on the wrong side of referee David Gough too, his exasperation over some frees that went against him drawing him into bad humour and blunting his edge.

By half-time, it was a fine game. Mattie Donnelly was outstanding for Tyrone, always able to find space down the flanks and flawless with his shooting. Peter Harte was a leader all the way. The teams went for tea level at 0-7 apiece and both sides knew they had the measure of the other. Tyrone were all over the Mayo kick-out; Mayo were finding their men in the full-forward line with more regularity. As we ticked into the second half, it was anyone’s.

They went score for score most of the way home. Tom Parsons came on for Mayo and made a big difference around the middle. He snaffled a point, the excellent O’Connor hoisted a couple of his own. By the 42nd minute, Mayo had pushed into a 0-10 to 0-8 lead.

Back came Tyrone. Harte kicked a phenomenal score on 52 minutes and, added to a couple of Connor McAlliskey frees, it put Tyrone 0-11 to 0-10 ahead. They would have been further up had McAlliskey not spurned the day’s only goal chance, swivelling onto a peach of a delivery from Donnelly and shooting straight at David Clarke.

Mayo made the most of their reprieve. Lee Keegan kicked two glorious points to prod them into the lead again and Cillian O’Connor chipped in with a free. They killed the clock like old hands should, daring deep-lying Tyrone to come and catch them if they could. They couldn’t.