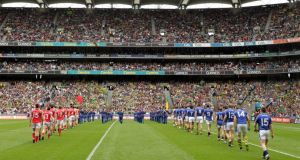 Over the past 10 years Mayo have become formidable at winning All-Ireland semi-finals: just one defeat in five outings. The big prize continues to elude them but the team has become – and especially under current manager James Horan – a model of consistency.

The problem, as the clock ticks on the greatest crusade in GAA history, is that the team itself has become too consistent in terms of its selection and is badly in need of reinvigoration.

Mayo arrive at Croke Park tomorrow sufficiently well regarded to be favourites to beat Kerry but one statistic haunts the fixture. When the counties met three years ago, at the same stage, 13 of the Mayo team named for Sunday played whereas just four survive from the Kerry side that beat them.

It’s fair to say that Kerry were nearing the end of a cycle whereas Mayo were just beginning but lack of change can easily cross the line from worthwhile experience into stagnation.

RTÉ pundit Kevin McStay was an All Star during his Mayo career and has managed the county under-21s. He concedes the situation is a concern.

“It’s a worry but at the same time there’s no great sense that’s there a load of other players out there. We’ve 11 or 12 of the same team that played in the 2011 semi-final whereas Kerry have four.

“The outcome is a sense of one team on the rise – I think there’s agreement their graph is going up – whereas with the Mayo graph you’re not sure whether it’s gone as far as it’s going simply because there’s been so little change that there’s a danger of becoming tired.

“That’s the worry and it’s in the nature of these things that everyone denies it until it happens and then everyone saw it coming.”

Mayo manager James Horan was evidently conscious of the need to refresh the panel during the league when a number of younger players saw game time.

“There have been definite improvements though. Seamie O’Shea has become a central player after being a continual sub for about three years going back to my time. He’s really become a first-choice player on the team-sheet now.

“Jason Gibbons has been unlucky with injury and he’s going to get his chance this weekend. And Jason Doherty has improved as the championship has gone on. But there’s no sense of any players about to make a major breakthrough or any major surprise off the bench. Even when you win an All-Ireland you need some variation. You can see that with Jim Gavin’s Dublin, who are playing better and with greater options this year. You do need to change it around.”

In Mayo’s fourth campaign under Horan – the last two of which have ended on the last day in All-Ireland final defeat – there is a sense of time running out and also of flagging momentum. This pessimistic interpretation of the season is based on the wobble at the end of the Cork quarter-final and the fact that Connacht wasn’t steam-rolled to the same extent as last year. Yet part of that depends for evidence on how the Roscommon match proved a far harder obstacle in Hyde Park this year compared with 12 months previously.

“We were far better than last year so it’s hard to gauge but I don’t believe the view that’s out there that they’ve fallen off. There was no comparison between our performance last year and this year. We were better prepared because John (Evans) had more time with us and we were fitter.

For McStay though, the problem of an unchanging line-out isn’t just to do with the first team but also the effectiveness of the bench.

“If you were to start examining what impact they’re getting from their next five players after the starting 15. If you tried to put some metric on that over the last season or two you would find you’re not quite getting the lift – James himself has said that. Obviously he wants more from the guys that are coming on in a similar vein to what Dublin get but that’s not easily done.”

There is also a view that Mayo took it easier in Connacht this year in order to build more effectively for August and September. McStay is unimpressed.

O’Mahony says that his successor can argue that the current team is a long-standing project and that it would make no sense to break it up now.

“So James Horan’s entitled to say that the team was originally the product of great change and why lose faith in it now when they’re on the cusp on major achievement.

“There’s a good number of the 2006 All-Ireland winning under-21 team still involved (nine) from Keith Higgins, Ger Cafferkey and Chris Barrett at the back, Seamie O’Shea in midfield et cetera. You’re effectively looking for them to win a senior title.” The crusade continues in Croke Park tomorrow.