Mayo players turn out in show of strength to county board 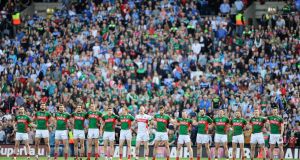 The Mayo football panel met with their county board at McHale Park, Castlebar on Thursday night, to discuss the impasse arising out of their vote of no confidence in co-managers Pat Holmes and Noel Connelly. Local media reported that the meeting lasted around 10 minutes, after which the players left without making any comment.

Although it had been expected that just the two player representatives Keith Higgins and Cillian O’Connor would be in the meeting, virtually the full panel went along, with local media reporting that 30 players were in attendance. The only players missing were either based in Dublin or are currently abroad. The county board was represented by chairman Mike Connelly and secretary Vincent Neary.

The large attendance at the meeting looks to be a show of strength and unity from the players after one local paper in Mayo released the names of some of the players said to have voted in favour of the management on All-Ireland final weekend. However, it’s fair to assume that the fact that it didn’t last any longer than 10 minutes doesn’t bode well for any middle ground to be found, in indeed it exists.

Neither Homes nor Connelly has made any comment on the situation thus far. Nor, for that matter, have the players. The next public step to be taken is an executive meeting of the county board, scheduled for this weekend.