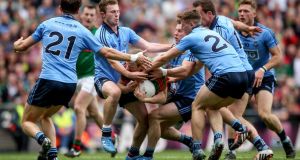 What compels them? What is it about Mayo that requires them to take these grand, dramatic days to the brink of oblivion before they can summon the inspiration and fury to make their supporters believe all over again? 1951 and all of that: this one was curtains. After Dublin’s Kevin McManamon’s executed his inevitable heartbreaking goal and a couple of gorgeous points kicked by the Brogan brothers and then another clipped by the greased lightning that goes by the name of Jack McCaffrey, the Kerry management must have been putting away their note pads. It would be Dublin and Kerry: the old firm. What’s another year for poor old Mayo?

So how did they get back into this? Even after Andy Moran thieved the ball away from Stephen Cluxton and forced Dublin’s John Small to smuggle a ball off the line, Dublin were in control here. They still led by five points in the 65th minute. They just had to kill the game. But the Mayo team were seized by some inner demon now and ran at Dublin with true abandon and belief for the first time all day. With the day almost lost, they decided to reclaim it.

“We are delighted with that,” said Noel Connelly.

“We are delighted with the character of the team. Maybe in days gone by a seven-point deficit with 12 minutes to go may have been too much. But I thought the lads showed great determination and pressed on. The penalty gave us a bit of momentum again. In the end we were on top and were unlucky not to get a chance to nail it at the end but it didn’t happen.”

Just as in last year’s All-Ireland semi-final against Donegal, the Dublin supporters saw a promising situation stray into something wild and unpredictable. The Dubs played some fine football, with Ciaran Kilkenny landing three excellent first-half points and Paul Flynn showing signs of touching his celestial heights. But the overall synchronicity was visible only in patches. The early departure of Rory O’Carroll, whose eye was then reportedly embroidered with 10 stitches, didn’t help. “A black eye, yeah,” said Jim Gavin, who didn’t make much of the incident. “His eye was closed so he wasn’t fit for returning to the game.”

Black cards to Michael Darragh Macauley (50th minute) and Denis Bastick (67th minute) highlighted further difficulties and while Dublin’s defensive pattern coped well for the majority of the match, they looked to be in bother when the Mayo men became possessed by the realisation that another September was slipping away.

A lot of errors

That seemed fair. The gentle pastures of Leinster seem far away now. Mayo fans laughed darkly at the confirmation that they won’t be dispatched to Limerick to this year’s replay but for all of the late heroics of the Mayo team, they were at the mercy of Stephen Cluxton’s radar-like kicking when he trotted forward to kick a 74th minute free which was awarded to Dublin when most of the action was happening away from the ball. For once, the gods smiled on Mayo: the Parnells’ man shot was off.

“It is well within his range,” said Gavin. “Just one of those things. He’ll be back. He is a very strong man mentally and if the opportunity arises I am sure he will take it the next day.”

“Well, we created chances and had eight wides in the second half. Disappointed with the chances we missed, yes. But I don’t think we underperformed, especially with 12 to go when we were under the cosh.”

That was a fair point. Still: it was only when confronted with defeat that Mayo discovered that streak of unreasonable courage which has made them such a fascinating and popular team over the last half decade. So Mayo and Dublin will thunder into it again next Saturday. Will the winners be fit to stand when it comes to playing Kerry?