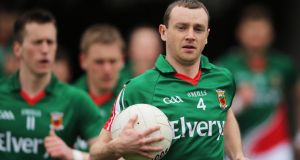 Mayo’s Keith Higgins will be back in 2015. Photograph: Cathal Noonan/Inpho

Mayo fans can rest easy after their county board confirmed on Saturday afternoon that three-time All Star Keith Higgins will not be retiring.

Earlier in the day, via a social media prank, the former Young Footballer of the Year announced that after some long “soul searching” he had retired.

Yet after more soul searching the 29-year-old appeared to recover control of his account and ease the panic across Mayo by rebuffing the earlier post.

The county have already lost their manager James Horan ahead of the new season, and despite the confirmation of Alan Dillon’s continuation for the new season the loss of Higgins would be a huge loss for the Connacht champions.

Such was reflected by the rapid response of the county board in confirming that “thankfully” the tweet was not true and all GAA fans “can look forward to seeing him back soon.”