Mayo confirm that Stephen Rochford will stay on 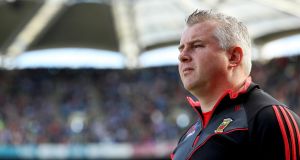 Mayo football manager Stephen Rochford has been given a two year extension to his current deal meaning he has been ratified until 2020.

The news emerged on Wednesday night following a meeting of the Mayo county board in MacHale Park. Rochford’s backroom team will be confirmed in the coming weeks.

Mayo GAA released the following short statement; “All involved with Mayo GAA thank Stephen and his team for the all the time and hard work already contributed to the Mayo Senior Football team and are delighted he has committed to Mayo GAA for the coming years.”

The Crossmolina native was appointed as Mayo boss in December 2015 for a three-year term, and for the second time in as many years last month he came within a point of claiming Sam Maguire - losing to Dublin on both occasions.

Since 2012 Mayo have played in five All-Ireland finals (one replay), and lost two semi-finals after replays. In that time they’ve had their summer ended by the eventual champions every year, and over the past two years they have played 19 championship matches. Yet for his part in all that, the 38 year-old manager remains happy to continue his role in the quest for a first All-Ireland title since 1951.

Last month he told reporters that; “I’ve gone into a new job with work, two young kids, so there’s a good bit to consider now at this stage.” But since then he has received the public support of several players, and now the county board to stay on until 2020.