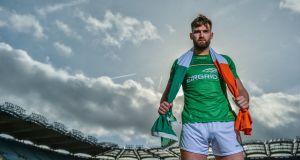 Aidan O’Shea: will captain Ireland in Australia for the International Rules series. “It’s a nice honour and nice for Mayo, my club and my family.” Photograph: Piaras Ó Mídheach/Sportsfile

Aidan O’Shea has been officially named as Ireland captain for November’s International Rules series in Australia.

It will be the Mayo footballer’s fourth Test series and he is the first captain from Connacht since 2005 when Pádraic Joyce, who is one of the selectors this year, led the team in Perth and Melbourne.

“It’s great,” said O’Shea’s in Croke Park on Wednesday. “It obviously wasn’t something I thought was on my radar after the Mayo season and the club season but I just asked work the same morning could I get time off and I was nervous enough asking that question and then Joe rang to tell me I was captain and I was thinking it was just as well they told me I could go. No it’s a nice honour and nice for Mayo, my club and my family.”

Disappointment with his club Breaffy in the county championship opened the door to the international series but he would have chosen if possible to prolong the club campaign. Instead he will be on the far side of the world, mixing the demands of the international game with the requirements of diplomacy as the Ireland captain.

His international career has been on an upward trajectory. Most recently in the one-match series of 2015 his switching around from centrefield to full forward created havoc for the Australians and he finished with 15 points, two goals and an over (a point in Gaelic football).

Such was the force of his performance that AFL coach Alastair Clarkson said after the Test that he was surprised O’Shea hadn’t been selected as Ireland’s player of the series.

Ireland’s new captain accepts that adapting to the hybrid game has taken time. Asked what the greatest challenge is, he thinks for a minute.

“Umm – stopping when I catch the ball. I remember out there [Croke Park] in the game two years ago, I kept running, especially down the stretch. There’s a lot more straight-line running and just absolute going for the ball. In our game, if I’m playing full-forward, you’re trying to shield off your man, nearly to roll him, whereas here it’s all about possession.

“You win possession and you’re in charge, whereas you let the ball drop, if you’re not executing your skills you’re in bother, you’re going to get absolutely thrown to the floor by the opposition. So those aspects around winning the ball and being clinical around your skills, they’re rewarding.”

This year has all been a bit of a blur from the moment the summer turned busy as Mayo cut their way through the thickets of the All-Ireland qualifiers to reach another final against Dublin and somehow come up empty-handed after another one-point defeat.

Joe Kernan’s weekend trials and training sessions provided some welcome change of scenery after the All-Ireland.

“I knew the Friday afterwards,” he said, “when I was asked to come in and get involved. I didn’t know I was captain until two weeks ago. I knew this competition was going to be on and it’s something I played before. I really enjoyed two years ago and I thought it was a good game and something I wanted to do. If I got the chance to do it then…”

He rejects the idea of a wanting a break after the intensities of an epic championship.

“Not really. It’s been a long season for Mayo but it hasn’t really been a long season for me. I missed a lot of the league and got back for the last two league games and three weeks out from Sligo I had a groin injury that held me up too. So it doesn’t feel like it’s a long season, I’m not the kind of guy that likes to take time out so I’m looking forward to this.”

Mayo’s championship campaign took them from defeat against Galway in June through a long rite of passage in and out of the qualifiers where a couple of the matches felt like terminal experiences.

“Realistically, we could have lost to Derry,” he said. “James Kielt was standing over that free and I thought, ‘that’s our season dusted’ because I’ve seen him kick points from some yardage. I thought that was our season gone there. Thankfully, we dug that one out. “

He reckoned there was no reason for manager Stephen Rochford not to continue although having finished two seasons that went all the way down to minimal margins on the last day of the championship, Rochford only declared his intentions to continue in his position late on Wednesday night.

“We’re lucky at the moment. We’ve a very strong group of players. That’s why we’ve been so consistent . . . we know when it comes down the stretch against the big teams we can put it up to them and win. We’ve gone closer than anybody else really against Dublin.”