Guides club to Donegal title with emphatic win over Killybegs 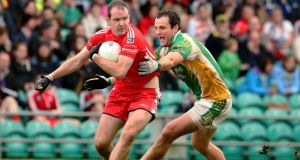 Glenswilly 3-19 Killybegs 2-6: There was no dilemma. Less than 24 hours after captaining his country in the International Rules series on Saturday night, Michael Murphy collected the second county championship medal of his career in Ballybofey yesterday. He chipped in with 1-5 and, while none of those scores came from open play, his inventiveness and power were the story of the game.

An audacious flick of the heel which set up Ciarán Bonner for an-icing-on-the-cake goal late on a drenched afternoon was worth the admission price but all day, Murphy’s ability to dominate these games was the shining factor. He basically obliterated the best backs the Killybegs men could muster.

“It is fantastic,” he said yesterday on the field as friends and family thumped him on the back. A big welt streaked down his face, one he didn’t have leaving the field in Cavan on Saturday night but he wasn’t too concerned about it.

“The big thing was making the decision. It was a horrible kind of decision to have to make but credit to both the Ireland and the club manager. It wasn’t as easy thing for the club; they might have thought I was turning my back on the them slightly. But it was never the case. It was about just getting the head down. Two games in two games: it is football, is it what you love. To play for Ireland and your club in a county final in two days – you would take it every day. People doubted us within the county but we proved ourselves today.”

Shifting power base
Yesterday’s Donegal final was another illustration of the shifting power base within the northwest football demographic. Killybegs once dominated the land as much as the sea around Donegal and their march around the field before yesterday’s parade evoked memories of their brilliant side which netted five titles from 1988 to 1996, the last year when they brought the Maguire Cup home. Glenswilly, in their third final appearance, have won it for the second time and such was their dominance in the second half that more titles are likely to follow.

Along with marquee county men Murphy and Neil Gallagher, they had Ciarán Bonner, the prodigal son of Donegal football at midfield. Bonner was among the most conspicuously talented of the county set-up in the uncertain years before Jim McGuinness took over but was absent for the revolution. This year, he is back in the county squad looking mobile as ever.

But the key to Glenswilly’s game is their general comfort on the ball and understanding. Gallagher, constrained all summer with by injury, was in ferocious form here: dominant under the high ball, moving from square to square freely and always, always looking to sent Murphy skywards with those accurate diagonal balls of his. And all through the field, Glenswilly have smooth ball players, from Colin Kelly who won the penalty which led to Murphy’s first goal with the busy Caolan Kelly and Keelan McFadden prominent all afternoon and the team’s other free taker, Gary McFadden, who had a storming second half.

Mesmerised
In the early stage, the direct ball caused problems on both ends. Killybegs needed something special to kick start their day. And when Glenswilly’s entire fullback line and goalkeeper seemed mesmerised by Christopher Murrin’s long, dropping ball, they got it: the ball fell straight into the net. After that, the Glen men were understandably jittery and Killybegs weren’t slow in repeating their trick. The elusive Brendan Faherty got his fingers to another long delivery and played a perfect handpass across the face of the goal for Hugh McFadden to palm into an empty net. The big full-forward was on the books of Sligo Rovers and showed why with two exquisite frees late in the first half which were reminiscent of Murphy’s effortless striking style.

The two goals kept Killybegs right in the game at half time when they retreated to the dressing rooms to discuss a 1-7 to 2-3 scoreline. Killybegs’ opportunist goals created the illusion of a tight contest and after the break, Glenswilly turned the final into a procession. Darren McGinley clipped a quick point and then big Neil Gallagher stormed forward to take a return pass from Murphy and banged it home on his second attempt.

Hammer and tongs
“It put us on sort of a platform. The half back line and midfield really started to come into it and pressed up. Once we got that bit of ball into the forward line a bit quicker and get the runners off that, it really helped us,” said Murphy.

The 40th minute dismissal of Jason Noctor, the Killybegs full-back who had gone at it hammer and tongs with Murphy and picked up two yellow cards in the process, was a blow they could not cope with.

Glenswilly trotted off 1-8 in succession after that and with the game opening up, Murphy was unstoppable. The flick will grow in legend: tearing out with his back to goal, two Killybegs men approaching to sandwich him before a delicate flick to Kealan McFadden altered the situation entirely. Glenswilly had a two-on-one and it fell to Bonner to get the open goal. Murphy raised his arms to salute a good day for club and country.