Liam Kearns to be confirmed as new Tipperary football manager 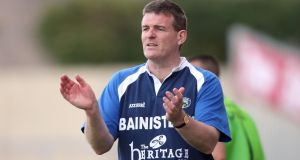 Liam Kearns will be confirmed as Tipperary’s new senior football team manager in the coming days.

Premier County football board chairman Joe Hannigan promised a “statement of intent” in the quest for Peter Creedon’s successor and he’s landed the man who almost masterminded a Munster senior title during the noughties.

With Kearns in charge, Limerick went close to a provincial breakthrough in finals against Kerry in 2003 and 2004, the latter won by the Kingdom after a replay.

Kearns had previously managed Limerick’s under-21s to Munster glory and an All-Ireland final appearance in 2000 and he’s taking over a Tipperary team on a similar upward curve, on the back of recent underage success.

Kerry native Kearns was manager of the Limerick seniors for six years before spending two seasons in charge of Laois in 2007 and 2008.

He was also a member of the John Evans backroom team in Roscommon this year, working as coach as the Connacht outfit gained promotion to Division 1 of the Allianz League.

It is understood that Kearns will be ratified at a football board meeting on Monday before a full county board meeting rubberstamps his appointment on Tuesday night.

There is speculation that ex-Tipperary and Kildare player Brian Lacey may come on board as selector alongside Paul Fitzgerald, the long-serving goalkeeper who retired in August 2014.

The remainder of the backroom team should become clear in the coming weeks, with a strength and conditioning coach a key priority for Kearns, who impressed a football board sub-committee with a detailed presentation during last week’s interview process.

Kearns has been present at a number of recent Tipperary senior football club championship matches and he was in Clonmel yesterday to watch Commercials beat Newcastle West in the AIB Munster quarter-final.

Meanwhile, the Thurles Sarsfields club has been plunged into grief ahead of next Sunday’s AIB Munster hurling semi-final against Na Piarsaigh at the Gaelic Grounds in Limerick.

Jackie Griffin (47), a selector with the senior team, was died tragically on Saturday after being struck by a car.