Lee Keegan calls on Mayo to improve their discipline

‘We need to get that in order because it is costing us dearly in big games,’ says defender 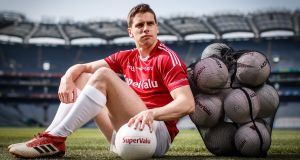 Lee Keegan at Croke Park for the launch of SuperValu’s #BehindTheBall Campaign: “Second-best doesn’t get you anywhere, unfortunately. We know that all too well over the past six or seven years.” Photograph: James Crombie/Inpho

Mayo’s 2016 Footballer of the Year Lee Keegan has underlined the need for the county to improve its discipline, as the team gets ready to pursue championship success through the highways and byways of the All-Ireland qualifier system.

Back in training and ready to make his championship entrance after months of injury, Keegan joins a team that for the third year running was beaten by neighbours Galway in the Connacht championship and yet again must focus on the qualifiers, through which they have navigated to the All-Ireland final in each of the past two years.

The week after next they travel to Limerick to take the first step in that process for this year.

Manager Stephen Rochford has, according to Keegan – speaking at the launch of SuperValu’s Behind the Ball initiative to encourage recreational exercise for children – been emphasising the need to clear their minds of the Galway defeat and its accompanying morale blow of a serious injury to influential centrefielder Tom Parsons.

“Stephen said that we needed to get our heads in order – sometimes we tend to worry too much about injuries and lads not playing and red cards; our discipline has cost us in huge games over the past couple of years.

“Now, I did say that Diarmuid’s [O’Connor, shown a straight red card against Galway] didn’t impact but it’s more that other teams recognise the discipline issue and target certain guys for red cards, black cards. We need to get that in order because it is costing us dearly in big games.”

There’s no disputing that. O’Connor was also sent off in the league meeting with Galway, as was his brother Cillian. In last year’s All-Ireland final Donal Vaughan was dismissed for retaliating against Dublin’s John Small, who was already getting a red card and as a result, Mayo lost a potential man advantage.

It has also been noted that the county’s matches feature fairly high red card counts – both for Mayo and their opponents.

“I suppose we’ve become quite physical over the last couple of years,” said Keegan.

“Maybe we’ve annoyed a couple of teams with that ‘being in your face’ attitude so maybe teams are adopting that kind of philosophy and seeing if they can get a reaction. Unfortunately, we have reacted on numerous occasions. Look at Dublin last year – Donie Vaughan – and Diarmuid this year – Cillian during the Galway league game.

“Teams recognise this now and get in your face and talk to you and get at you. If you get a reaction, you’re going to rely on that 100 per cent. Every top team knows that small bit of weakness and they’re going to pounce every time. It’s hard to put a finger on why it’s happening. I know why teams get physical because if you look at the games we’ve done really well in, we’ve dominated physically and really pressed.”

Keegan’s galvanic presence was certainly missed against Galway but given the nature of his injury, a dislocated shoulder sustained in the league match against Tyrone last March, it was deemed too risky.

It was actually more complicated with labrum tears in the shoulder – just months after he had undergone surgery for similar damage to his hips – and a serious concussion, his third.

The lengthy rehab has also rested him from any further exposure to head injury – “that was another part of the reason not to be rushing back,” – and although he received the all-clear, Keegan accepts another incident would be problematic.

“If it happens again we’ll have to really sit down and maybe assess where I’m going after that. I’m not getting any younger.”

He acknowledges that he is lucky to have understanding employers, Steris, the medical products and services company in Westport.

“My boss, Lorraine, would be fully understanding when it comes to football and time off. I think it’s very much that if the work is done there is no issue, go on out and play.”

The lack of a provincial medal since 2015 rankles and not even the epic battles with Dublin can compensate.

“I suppose the last couple of years we’ve been in All-Ireland finals and we’d nothing to show for it: no Connacht medal, no league and no All-Ireland medal. So as much as we want to say we’ve had good years, we’ve nothing to show for all the work we did. Second-best doesn’t get you anywhere, unfortunately. We know that all too well over the past six or seven years.”