Kerry have more in the tank for Munster final replay 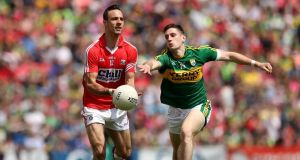 Cork’s Kevin O’Driscoll in action against Kerry’s Paul Geaney who returns to the Kingdom’s starting line-up for the replay at Killarney. Photograph: Ryan Byrne/Inpho

Selections are generally an indicator of how teams view replays. The obvious imperative after a draw is to learn from it and improve. A clear sign of which team sees greater scope for improvement can be seen in changes made.

By that criterion Kerry, with four switches, appear to feel less happy with the outcome than Cork who have announced an unchanged team

The snatched draw after a match that revealed many problems makes this an unsurprising conclusion and the fact that Eamonn Fitzmaurice’s selections all address disappointing elements of the drawn final has had an interesting impact on perceptions.

Alan O’Connor had a major and unexpected influence the last day, dominating centrefield despite having rejoined the panel just weeks before the championship. Kerry counter by recalling Anthony Maher to partner David Moran, restoring the All-Ireland winning combination from last year.

It may be hard for O’Connor to replicate his display given Maher’s greater potency in the air as well as the demands of playing six days after such a strong performance.

Also on the list of concerns was the facility with which Cork’s running attack created chances in a match which saw Kerry concede three goals. It was reminiscent of the league match in March when the champions similarly struggled to stay with the opposition’s kinetic movement.

The two defenders, who had the greatest effect as man markers in last year’s All-Ireland, return. Aidan O’Mahony and Paul Murphy stifled Donegal’s Michael Murphy and Ryan McHugh and won’t be short of candidates for restraint this evening.

Colm O’Neill is Cork’s most menacing forward but Brian Hurley – particularly if rumours are true that he might pushed into a more advanced role – and Donncha O’Connor, a huge influence on the second-half comeback, also need watching as does Mark Collins.

Cork’s new-look half-back line created most surprise with Brian and Barry O’Driscoll playing the role of running support lines and linking with the sweepers very effectively. Kerry’s half forwards don’t look any more mobile for the addition of Bryan Sheehan.

Cork’s inside defence played well. James Loughrey was focused in his shadowing of a well -contained James O’Donoghue but Paul Geaney made an impression when he arrived and starts today. There’s no reason why Cork can’t maintain or step up on the drawn match but Kerry have more room for improvement and that can settle it.