They don’t like the term ‘marquee forward’ in Mayo. The very mention of it causes James Horan to roll his eyes and it’s easy to see why 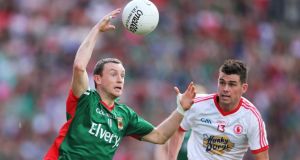 Mayo’s Keith Higgins in action against Tyrone’s Darren McCurry. The versatile Higgins could be the answer to Mayo’s lack of firepower up front as they prepare for another championship year.

This is another piece about the Mayo forwards. Sorry. Has to be done. There might not be wholesale agreement on Mayo being the second best team in the country but it’s reasonable to view them as one of the top three. They will be there in August, bet your life on it. This is about what happens after that.

They are the leading scorers in Division One so far this spring, having already comfortably oustripped in five games the total they ended up with after seven in the 2013 league. Though scores have generally been higher across the board this year, Kerry are the only other side in the top two divisions to do the same.

Yet for all that Mayo are obvious contenders, nutshell the question that hangs heaviest over their 2014 chances and it comes down to this – who will score for them when the need is greatest?

They don’t like the term ‘marquee forward’ in Mayo. The very mention of it causes James Horan to roll his eyes and it’s easy to see why. Mayo under Horan are a team that deals in tangibles and measurables. A marquee forward is a vague enough beast, a kind of you-know-it-when-you-see-it deal. The more he hears the pat observation that Mayo lack such players, the less he is inclined to get into just what constitutes one.

But a couple of stats are worth looking at in this regard. Of the teams who’ve been beaten in All-Ireland finals over the past 30 years, only three have not contained a forward who made that year’s All Stars team – Mayo 2013, Cork 2007, Mayo 1997.

And if that’s still an unsatisfactory metric, based as it is on opinion rather than cold numbers, then consider this – in the last two All-Ireland finals, no Mayo starting forward has scored a point from play after half-time. Andy Moran’s goal last year and a point by substitute Richie Feeney in 2012 constituted the sum total of scores from play by Mayo forwards in the two most important second halves of this team’s life.

So it doesn’t matter what terms or labels we use. The scoring return from the Mayo forward line is a weakness that needs to be turned into a strength if they’re going to win an All-Ireland.

Take shape
Horan’s intentions for the year to come have started to take shape. The team he has named for the meeting with Dublin at Croke Park tonight isn’t far from the one he’ll likely bring into the championship when the time comes. Chris Barrett will return soon at corner-back and Seamie O’Shea should come in at midfield before long as well. Otherwise, this could well be Horan’s championship team.

If it is, then the front six is fascinating. Kevin McLoughlin, Keith Higgins and Jason Doherty in the half-forwards, Cillian O’Connor, Alan Freeman and Andy Moran inside. Each one a match-winner on his day, albeit in vastly different ways.

Higgins is the x-factor. Long and loud have been the cries in Mayo that a two-time All Star defender costs them more by his absence from the defence than he earns them in attack. And the temptation to send him back there firefighting is one Horan has been unable to resist on occasion during the league so far. Though named at 11 for all five games, he played in defence for the whole game against Kerry and finished the Tyrone game there.

Yet there are clear advantages to having him play in the forwards. After missing a couple of good goal chances in the first two games, he has adapted and now lays the ball off for Freeman, O’Connor and Doherty to take their score. He rarely turns over possession and his pace is a huge asset, especially in the world of the black card.

“I think it is in Horan’s thinking alright,” says Mike Finnerty of the Mayo News . “The black card helps teams with runners because you have that bit more freedom and that bit more space. The more runners you have and the more guys you have who can find space and open things up the better. He has definitely gone with a half-forward line bursting with pace.

“With Higgins and Doherty there, these guys aren’t your conventional catch-kickouts, hoover-up-breaks type of half forwards. They’re more break-the-line, get-an-overlap-going kind of players. That’s what Higgins is in there to do – to run at a man, draw him out, slip in the pass and set up a goal chance. But there’s no doubt it leaves them a little bit short at the other end.”

Stay fit
Of the other five, O’Connor and McLoughlin are both fixtures in the side and will continue to be as long as both stay fit. Freeman has been their most dangerous forward three wins over Cork, Westmeath and Kerry and has clearly got past whatever grievances he harboured over being taken off in the first half of the All-Ireland final.

Where and how Moran fits into it all will be the key. The squad’s spiritual leader, he is someone Horan wants to keep on the pitch if at all possible. But he struggled last year on his return from that cruciate injury and although he was their best forward against Dublin in September, there is a doubt now as to what his best position is.

The explosiveness off the mark that made him such a brilliant ball-winner in 2011 and ‘12 was missing last year and if he doesn’t regain it, he may have to be reinvented as a half-forward with Doherty moving inside. One way or another, a fit and healthy Moran will be in the team – which could be bad news for Alan Dillon when he returns. With the pace of the game ratcheting up by the year, Horan might be loath to find a spot for both of them in the same side.

The return of Jason Doherty was a card Horan was likely to play at some stage, although not many would have predicted him to be played at half-forward. Doherty, after all, is the player who scored seven goals in five games in the 2011 and you’d have thought getting him close to goal would be a priority. But he has shone so far all the same, scoring 2-4 from wing-forward.

Mikey Sweeney has impressed Horan at club level and started against Crok and Westmeath. Young Adam Gallagher was the star man in the opening games against Kildare and Tyrone but has faded since.

Darren Coen, Enda Varley and Brian Gallagher all have claims. Other options mentioned in dispatches are the siting of Aidan O’Shea or Barry Moran at full-forward, with O’Connor at centre-forward and Higgins repatriated to the defence.

For now though, this is it. Horan wouldn’t have named this strong a side if he didn’t want to make a statement tonight. For the eternal question of the Mayo forwards, this is the latest stab at an answer. It might even be the best one.