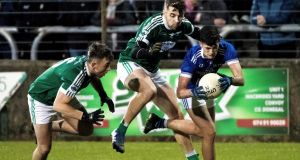 Naomh Conaill brought a close to Donegal’s never-ending story after a dramatic point by John O’Malley in the final minute of the second replay saw the Glenties men dethrone defending Ulster champions Gaoth Dobhair, who finished with 13 men.

Michael Carroll ended a 20-minute scoreless streak for Gaoth Dobhair and Odhrán Mac Niallais’s classy point made it a one-point game with 10 minutes to go.

Eamon Collum tied things up with a free, but O’Malley tucked over to give Naomh Conaill their fourth Dr Maguire cup.

Gaoth Dobhair had Eamon McGee sent off as the teams lined up for the start of the second half. McGee had been involved in a clash with Naomh Conaill sub Eoin Waide at the end of the first period and paid the ultimate price.

Ciarán Thompson’s brilliant scores from the shadows of the stand put Naomh Conaill three up in the 42nd minute.

Gaoth Dobhair hit back, but had Michael Carroll black carded and Odhrán McFadden-Ferry red carded in the closing minutes.

A tense air hung at MacCumhaill Park and the throw-in was delayed by 10 minutes to allow the big crowd take up their positions.

Naomh Conaill dared to dream when Leo McLoone landed a brilliant score off the outside of his right foot in the 20th minute.

Long-range efforts from placed kicks by Charles McGuinness – a nephew of former Donegal manager Jim – and Ciarán Thompson – swung the tie in Naomh Conaill’s favour earlier in the night.

McLoone and an equally-impressive score by Ethan O’Donnell – later named as man of the match – opened up a two-point lead only for Carroll’s beauty to bring Gaoth Dobhair within a point.