Jim McGuinness: Donegal and Tyrone will give no quarter 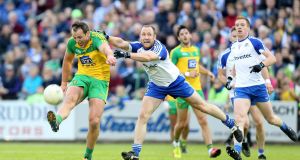 Every so often, the championship creates an extraordinary rivalry, meaning that teams can bring a decade’s worth of emotion and envy and celebration and pure competitive desperation into one afternoon.

The Ulster final between Donegal and Tyrone in Clones (and it could be no other place) on July 17th is one of those occasions.

Over the weekend, both teams made efficient work of ensuring they get to spark off each other once again. Against Monaghan, Donegal dominated the game and controlled it and scored with fluency and hit the magic number of 0-17. I felt achieving that scoreline was important in the context of their overall season.

The big guns were firing: Michael Murphy 0-5; Patrick McBrearty 0-4. Marty O’Reilly went into the middle of the park to mark Karl O’Connell and still chipped in with 0-3. Rory Kavanagh and Frank McGlynn put in the kind of big summer performances we have come to expect down the years and the McHughs were full of running.

As a team, Donegal controlled the game and ran with purpose and moved the ball with intent through their hands and they also dealt with Monaghan’s key men over the two games – and crucially without the services of Neil McGee.

The other half of the Ulster final was a situation where Tyrone just blitzed Cavan. Tyrone’s intensity and defensive shape is back. They have youth in their side. They have legs. Three of their six second-half scores were goals, which tells its own story in terms of ruthless execution.

Peter Harte was outstanding; he was on a hat-trick for most of the game and could have got it but finished by scoring 2-3 from play. Cathal McShane, the under-21 from last year, stood out and Colm Cavanagh continued in what has become a really masterful sweeping role. We could pick a lot of players out – Ronan O’Neill, Mattie Donnelly: they had conspicuous performances all over the field.

What I really liked was Tyrone’s decision making, particularly when they were bearing down on goal. Their turnovers and breaking at speed was so sharp and most of their scores came in transition. They seem to have reacquired their aggressive edge when they move the ball. After 26 minutes it was 2-7 to 0-5 and basically the game was over.

And then Mickey Harte got a good contribution from his bench. So they won the game comfortably and all in all it was a good day’s work. In one sense, there is a silver lining for Donegal in the fact Cavan scored 2-17. That will serve as a motivation for Tyrone and it is something they can get their teeth into when they get together in Ballygawley this week. Because they know if they concede that kind of a score in the Ulster final, then they probably won’t be Ulster champions.

Both teams got the extra day out and therefore were able to refine their game plan under championship pressure and they can prepare for their latest match-up in a really good state of mind.

So: Donegal versus Tyrone again. Where does it leave us?

This is Donegal’s sixth Ulster final in a row. It is easy to gloss over that but it is a feat only achieved by the Down team of the 1960s. I really hope there are as many flags flying around the county for the next few weeks as there were back in 2011, when we were trying to win our first Ulster title in 19 years. Who would have predicted Donegal would make it back to another five finals after that? It is a phenomenal achievement and the core of the team – despite being written off since around 2012 – is there for all six finals.

If you go back to the winter of 2010/’11, Tyrone were going for three in a row in Ulster. They looked almost unassailable and Donegal probably weren’t on their radar. They had three All-Ireland titles in their pockets and five Ulster titles.

The Donegal lads had been on the receiving end of that phenomenal run of success on many afternoons. Or else they were simply spectators of Tyrone’s success. When I came in to manage Donegal, one thing I was certain of was that we had to plan with great detail to beat Tyrone. They were the standard bearers for the Ulster championship. They were the team everyone looked up to and Mickey Harte was the most respected football mind in the country.

The funny thing is Tyrone are in precisely that place now. There is a lot of talk about them and have played some tremendous football but that belief they have won’t become something true until – or unless – they win the final.

In 2011, Donegal stung Tyrone. They were really hurting. Because they had no Ulster title, all of a sudden. And so the following year, we knew they were going to come at us with absolute venom. Those dynamics just clashed when the teams met in the semi-final of 2012. It was a 70-minute, non-stop battle. And, when we won that match, that was the moment I felt we started to take psychological control of the dynamic between the counties.

We went on to win the All-Ireland and then in 2013, the teams met in Ballybofey and when Neil McGee absorbed that hit on Stephen O’Neill, that felt like the moment we broke them. Then in 2015, when Rory took over, we beat them again in Ballybofey in another very tense, tough match.

So if you look at the 10-year period before 2011, when Tyrone were to my mind the team of the decade, an absolutely brilliant force, and from 2011 when Donegal transformed their fortunes, it is almost like role reversal.

I go into all this to make one simple point: what this fixture, this Ulster final, means to both sets of players is simply exceptional. Tyrone feel they are back. Donegal feel they can handle Tyrone. Neither will yield a millimetre. So, in terms of the history they share and have made, I believe this game means as much as an All-Ireland final.

This game is going to be defensive, aggressive, intense, competitive. There is a bit of disdain between the two teams. But it will be enthralling. It will be completely gripping because of this sense of a decade of life’s work being poured into the effort to win the Anglo-Celt Cup.

The pain of defeat will be more acute for the losers than any other game they have played. And for the winner, it will be one of the sweetest moments of all. And you can bet that both managements and squads will be fixating on this. It is a career defining moment of this particular rivalry. It is an opportunity for the Tyrone team to say: yeah, but you couldn’t do it in a final.

Winning this one will help to erase some if not all of the pain inflicted by Donegal. And it is a chance for Donegal to unequivocally claim their place as the Ulster team of this decade.

It is not just a match to savour – it is a day to savour. They don’t come around very often because it takes years to reach the height that this rivalry is now at and, even then, teams seldom have the consistent excellence to clash so often. It will be a privilege for supporters lucky enough to be there. And for the players on both sides, it will be one of the days of their lives.