Who are the most cynical team in Ireland in 2017? And what have the cards been for? 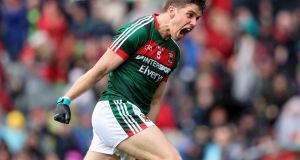 Mayo’s Lee Keegan: he received a black card in March in the League against Tyrone, and another in the qualifier win over Cork. Photograph: INPHO/Oisin Keniry

Five of the remaining seven counties in the All-Ireland Football Championship are in real danger of losing a player to suspension as the competition reaches its boiling point.

There are 11 players who are either one black card, two yellows, or a combination of both cards away from missing a game. They are one cynical foul from missing an All-Ireland semi-final, or final*.

A player will be suspended for one match if he either; receives three black cards within that year’s League and Championship campaign, three double yellow cards, three instances of a black card following a yellow card in a match, or any combination of the previous three.

However, Roscommon’s opponents Mayo have both Donal Vaughan and their talisman Lee Keegan on the edge.

Keegan, who scored 1-3 in last Sunday’s draw, received a black card in March in the League against Tyrone, and another in the qualifier win over Cork.

Tyrone, meanwhile, have both Niall Sludden and Kieran McGeary to keep in check. Both players started in the half forward line during the Ulster final win over Down, with the latter dismissed on a black card for a “pull down”.

Monaghan’s free-scoring defender Fintan Kelly goes into Saturday’s encounter against the Dubs in pursuit of four goals in four Championship games. He will also know that he is one of three Monaghan players who are one transgression from missing a semi-final. The other two are Owen Duffy and Darren Hughes.

Dublin will know that if they reach the semi-finals – by which time Diarmuid Connolly’s 12-week suspension for interfering with an official against Carlow will have been served – Connolly teeters on another suspension. The St Vincent’s attacker was black carded against Monaghan in the League and Kerry in the League final.

Kerry, the only team already into the semi-finals, have midfielder Jack Barry, Jonathan Lyne and Duracell bear Donnchadh Walsh all on the edge of a one-game ban. Whether that be a semi-final replay, a final* or the start of the 2018 season; as these bans do carry into the following season.

So far this year four players have received suspensions for an accumulation of black cards (double yellows or a black after a yellow).

Two of those, Kildare’s Kevin Feely and Down’s Kevin McKernan, had one of their cards overturned upon appeal. As did Carlow’s Brendan Murphy, although he went on to pick up two yellows in the following match which forced him to sit out Carlow’s win over Leitrim.

Sligo halfback Brendan Egan received his third black card in his team’s qualifier exit against Meath; he will now miss their League opener next year.

Last year, as has been the case so far in 2017, Brendan Murphy was the only player to miss a game in that year’s Championship as he sat out his county’s defeat to Cavan.

Diarmuid Masterson picked up his third combination in Longford’s qualifier defeat to Cork, while Jonny Cooper received his second black card (to go with an earlier double yellow against Cork in the league) in the All-Ireland final replay win over Mayo. That ruled him out of Dublin’s League visit to Cavan this year.

So, who are the most cynical football team in Ireland in 2017? Well, excluding New York, whose average for black cards to matches is lopsided by the fact they only played one match, the answer is Longford. They have 10 black cards in as many games. And last year they were also the most cynical, with 11 in 11 games, only just shading Galway and then Sligo.

Last year the least cynical team were Wexford, with one in nine games, followed by Monaghan with three in 11.

This year Longford are trailed by Tyrone (nine in 10) and then Kildare with 10 in 12. The least cynical team so far is Fermanagh (one in nine).

Of the seven teams remaining, Roscommon have the best black card record (two in 10), while Dublin are next best with three in 11 (an improvement on last year when they had nine in 16 matches). Kerry follow Tyrone as the most cynical team remaining with nine in 11 games.

And what are all these black cards for?

With a guaranteed six games remaining this year, there have been 33 less black cards than in the entire 2016 season.

* (This article has been updated to reflect that black card suspensions do still apply for All-Ireland finals.)