If London lose to Leitrim, it won’t be because of a lack of fitness or conditioning 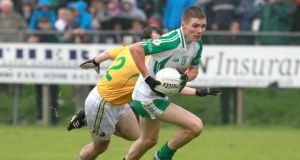 London’s Pádraig McGoldrick on the way to scoring the only goal of the game against Leitrim at Ruislip last year. The visitors prevailed in the end 0-12 to 1-8. Photograph: Gerry McManus/Inpho

Listen in to the hit parade of London’s near misses in the Connacht Championship down the years and you generally find the same song, just with multiple cover versions.

For them to compete at all, they’ve needed a fast start.

They’ve dug in and either led or been level with five minutes to go.

And then the needle has hit E just when they could least afford it to.

The previous year against Mayo they led by two with four to go before Kevin McLoughlin and Trevor Mortimer forced extra-time, which they lost 1-1 to 0-7. Even back in 2005 they led Roscommon 1-6 to 0-7 at half-time, only to score just two points thereafter to let the Rossies win by a point. Fitness has always had its say.

Decade’s service
Paul Coggins has spent 26 years of his life with London GAA as a tattoo. He was a player the first day they played a National League game away back in October 1993 – they won as well, beating Waterford by 1-8 to 0-10. He hung in for a decade and inevitably came to manage them over time.

But it has always been one of two stories come championship. They were either tonked out of sight or they made a game of it up until fitness told.

He wasn’t particularly happy with either scenario but at least with the second one he had something to work on. Improving quality is long-term work. But anyone can be fit enough if they want it enough.

“Look, we don’t want to just be known for participating and being in games for 40, 50 minutes. We have more ambition than that. We want to give the performance for the full 70 minutes and we know we have to do that. If we weren’t as fit, if we hadn’t trained as hard, we wouldn’t have been able to give the performance that beat Sligo. We needed to be still going right up to the last kick of that game or we wouldn’t have won it,” says Coggins.

“Fitness was one of the factors alright. We trained hard enough before but these guys have just raised the bar. They’re doing lots of stuff on their own and in their own time. They’re forever watching where they can make little gains because it’s all about inches at the end of the day. The difference between success and failure is tiny. These guys are very well educated. They read about stuff and they try to do the right things all the time.”

Work shone
Fermanagh man Paul Murphy has taken charge of their strength and conditioning over the past couple of years and his work shone in that second half against Sligo when London didn’t flag despite having to play the last half-hour with only 14 men.

The traditional obstacles that a London team training as a group have to overcome are still there but between Murphy and Coggins, management decided this year to give the players more work to do on their own to help them build up their bodies that bit more and save them travel time.

“You still need your squad get-togethers and we have those in Greenford or Harrow or Ruislip. But it still takes an awful lot of time for these guys to get around. Take Lorcan Mulvey. He’s up every morning at 6am for work. Then when he’s done, he gets on the tube and has a quiet bite to eat. He walks from the tube to the pitch, does his training, walks back to the tube and heads home and walks to his house late at night.

“That’s the way of it for most of them and 80 per cent of the time they still have to do that . . . But we are a little bit different that way, that’s just a fact We’ve often had to delay training sessions for up to 45 minutes because lads just can’t get there.”

That pebble will always rattle in their shoe. Fitness though, that’s a box they’re able to tick. And as far as London are concerned, they won’t be beaten tomorrow because they ran out of puff.