Galway spring the mother of all surprises in Mayo 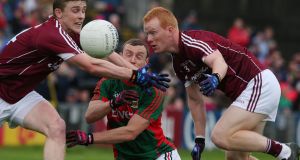 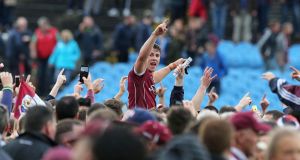 It may take some time to wipe this look of utter defiance off the face of Galway football. Where’s the apathy now? The recrimination? The undertaker sighs?

Then again Kevin Walsh may want to keep that look exactly as it is – the Galway manager unloading barrels of defiance here as artillery for the deadliest ambush of the summer.

Because in the end they’d killed off not only Mayo’s hopes of a record sixth successive Connacht title, but surely their All-Ireland hopes too. No wonder a near deathly silence fell over Castlebar on Saturday evening, punctured only by the small pockets of cheer from the Galway supporters who possibly defied themselves in being here. No one had given their team much hope.

“Look, we took the stick the last few weeks, used it as a bit of motivation, but that can often go against you unless you have the structures and systems right,” said Walsh, emerging from a Galway dressing-room still doused in celebration.

“We knew if we could get ourselves together we would have a great chance. All that would have been a motivation, but at the end of the day, you still have to go out and play.

“But that was only this week. This win didn’t happen this week. This has been worked on, really, really hard, for the whole league. And last year in Pearse Stadium [against Mayo], we knew that we were a lot closer than you boys gave us credit for. We felt that 12 months further on, we had a lot more work done. And that is why, in a way, we felt that we were a bit disrespected with the media in recent weeks. But we are about positivity, as people.”

Indeed Galway came fully charged, and despite throwing a blanket over their own half of the pitch, never ceased attacking either – Thomas Flynn’s goal on 55 minutes suddenly turning the game in their favour. Mayo, initially frustrated, then simply ragged, found no way of retrieving it – going 19 minutes of the first half without a score, then 21 minutes of the second.

“What we’ve also done is brought a bit of pride back, which is really important. The boys are entitled to be jumping and roaring inside there, for a few minutes, but we know we have a huge task on our hands to win the Connacht final. We stuck to the task, but we know that we have nothing won yet.”

Galway didn’t win this game entirely on defiance: they were wonderfully opportunistic too, from 20-year-old corner forward Eamon Brannigan scoring 0-3 on his debut, to Flynn’s goal itself.

He latched onto a poorly judged kick-out from Rob Hennelly, and despite the close attention of Kevin Keane, burned his shot into the Mayo goal. That squared it, and when Galway followed up with four points without reply, there could only be one winner.

The 21,784 crowd could make little sense of it: Mayo not scoring from play until the 31st minute, and even then through defender Colm Boyle; finishing that first half with 10 wides; Aidan O’Shea held scoreless and anonymous, and contributing nothing only additions to their total of wides

Mayo lost Jason Gibbons to a shoulder injury after 20 minutes, but no running repairs could save them, not the half-fit Diarmuid O’Connor, and definitely not veterans Andy Moran and Donal Vaughan.

Galway’s defiance was backed up by increasing fearlessness, and although the first half was mostly scrappy and sloppy for both teams, there were warning signs: Shane Walsh and Johnny Heaney hit two scores late in the half to propel Galway in front, five points to two, before a flurry of scores – Cillian O’Connor finally getting his radar in check – gave Mayo a two-point advantage at half time, 0-8 to 0-6.

Not even the floodlights being switched on at half-time could brighten up Mayo’s game after that, their slow yet thorough disintegration in the second half a shattering experience which will be extremely difficult to repair.

No such worries for Galway, who go on to meet Roscommon in the Connacht final on July 10th with fresh echoes of 1998, when an equally unheralded team defied not just provincial predictions but All-Ireland ones too.

“There are similarities there,” said Walsh, himself part of that 1998 team. “But if we won last year, you would have been saying the same thing. But the belief has come back. That has to be a help.”

That belief, coupled with that defiance, will be hard to stop now. Even at age 20, Brannigan had that look on his face: “We weren’t even tired at half-time, we knew we had them rattled. We just kept pushing, everyone knew what they were supposed to be doing, and we stuck to the gameplan. And I can’t wait now for the Connacht final. Can’t wait.”