Galway lay down marker with another Ulster scalp 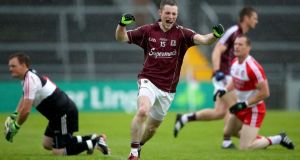 The rap sheet on this Galway side is getting harder and harder to stand over. For the second weekend in a row they won a qualifier against an Ulster team. To put that in context, this was the first time since 2010 that a team from beyond that cussed, ornery province to the north had successfully bounced two of its counties out of the qualifiers in one summer.

Kildare beat Antrim, Derry and Monaghan five years ago. Since then, no fewer than 20 teams have managed one qualifier win in a season over an Ulster team but Kevin Walsh’s side are the first to see their way to two. At a time when the mere sight of a blanket defence seems to break the spirit of some southern teams before they start, Galway have knuckled down and stayed patient and found a way.

That’s right. Galway. The flighty, flaky chancers from the west are undergoing a personality refit before our very eyes. There was more than one voice to be heard around Salthill on Saturday night declaring as gospel that in previous years this was a game they would have lost. That possibility was certainly open to them here.

They played with a huge breeze at their back in the first half but seemed to make bad use of it, only scoring a single point from play. They were thankful too for some benign refereeing from Conor Lane (of which more anon) for the frees that bought them a 0-8 to 0-5 half-time lead. It looked a slender boast and there was a sense of resignation in the crowd at the break that it wouldn’t be enough. 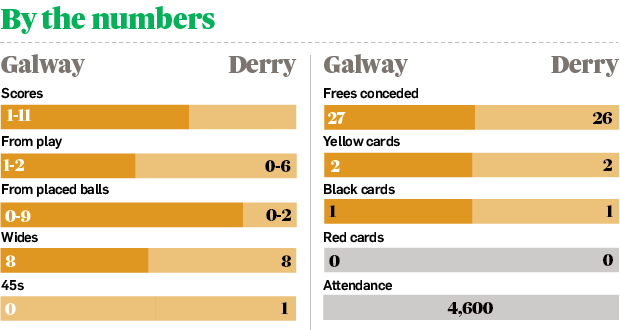 In putrid weather, Derry had the look of exactly the sort of austere, no-sentiment Ulster side that would polish the game off by winning the second half by 1-2 to 0-1 or some such. They were far better organised in that opening half and had no interest in allowing the game to open up. Eoin Bradley and Danny Heavron popped up to take stunning points after long periods of expertly joyless build-up play. If they could do that into the teeth of the weather, it seemed only logical they would carry the day with it at their backs in the second half.

“What’s enough advantage, though?” replied Walsh when asked if he thought at half-time his side had put enough between them. “Years ago, you could use the wind to keep horsing ball in long but three points is a fair lead now the way the blankets are going.

“We were quite happy, in particular after being three points down. For me, it wasn’t about what was on the scoreboard, it was about the work-rate that was evident, how they were sticking together as a team.”

To Galway’s credit, the further the game went, the more comfortable they became. Gary Sice and Gareth Bradshaw were immense, Gary O’Donnell and Danny Cummins showed flashes of the sort of blue-collar attitude Galway needed to see it out. With 10 minutes to go, they led by 0-11 to 0-7.

Then came the game’s major talking point. Bradley, who had been quiet since his early point, came barrelling along the endline and fisted a pass across the face of goal for the onrushing Cailean O’Boyle. On first sighting, it seemed pretty clear-cut that Finian Hanley had pushed O’Boyle in the back.

Watching it back on TV, it wasn’t nearly as obvious. Hanley had his hand on O’Boyle but the Derry man made far too much of it and the pass inside was probably beyond his reach anyway. One way or another, it was a pivotal moment. Lane didn’t give the penalty, Galway worked the ball upfield and Cummins had it in the net within a minute. The day was done and dusted.

A steaming Brian McIver walked away from the Derry job afterwards.

“I’ve given my life in terms of GAA. I just can’t handle referees’ decisions like that any longer. I’ve had to step down. Everything in the GAA has moved on in the last 20 years except referees. Maybe I saw it in a totally biased way but I thought that was one of the worst refereeing decisions I have ever seen in my life.

“He kept them in the game in the first half. They scored one point from play and seven frees? Unreal. [Brendan Rogers’s] black card? That was just another crazy decision. These guys are accountable to nobody. Everything in the GAA is designed to improve things and the standard of refereeing has just got worse and worse over the years.”

1 Reality Bites – Tales from the new normal: Caitríona Cormican
2 Nicholas Quinn: ‘Swimming became how I dealt with grief’
3 Ian McKinley: ‘You do take for granted the simple things in life’
4 A beautiful, happy accident - Moneyball is the best sports movie ever
5 James McClean still failing to learn his own online history lesson
Real news has value SUBSCRIBE