GAA statistics: Possession and its importance in laying down law 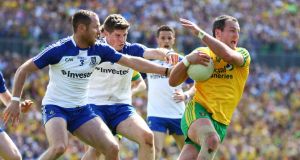 Donegal’s Michael Murphy was much less influential against Monaghan than he had been in previous games in Ulster. Photograph: Cathal Noonan/Inpho

Possession in Gaelic football has never been more significant – the battle to keep it, now as much as winning it.

In the Ulster final Monaghan set the platform for their one-point win over Donegal in the first-half – leading 0-8 to 0-4 at the interval. Monaghan held possession for 11 minutes and 50 seconds of the first half, which equated to nearly 60 per cent of the possession. That was out of less than 20 in-play minutes, all the more impresive when you consider the average in-play minutes total for an intercounty game is less than 35.

Three of Donegal's four points came within the first four minutes and 58 seconds of the game, but they were second best for the remainder of the half.

In the second period Monaghan had possession for just five minutes and 47 seconds and were outscored 0-3 to 0-6. In fact, they didn’t score for the final 21 minutes, with Donegal hitting nine of their 14 wides in the second 35.

During that period, Donegal had possession for a much-improved nine minutes and nine seconds as they pushed up on the Monaghan players between their own 45 and the half way line, and provided more support play within their own build up .

Kildare similarly dominated possession in the opening half against Cork last weekend. They had 61 per cent possession and led 0-11 to 0-5 at the interval. Paul Cribben was central to that display with 38 involvements as Cork’s tired legs were stretched.

The key man for Donegal in this ever-growing battle to retain possession is their captain Michael Murphy. While Rory Gallagher has his team set up to invite teams beyond their 45, suffocate and counter-attack at speed, they still rely on possession of the ball to dictate the tempo and shape of the game.

Murphy’s move out the field, more so than ever this summer, has allowed Donegal a player in the midfield/centre back role who can act as conductor between their fast counter-attack, the long ball and a more possession-based approach. Against Armagh, he had 51 involvements (Donegal were in possession for over 21 minutes of that game) but against Monaghan he had just 19.

He was clearly carrying an injury in the Ulster final which led to calls, not for the first time, for him to be moved back into full forward. Of course if given the minutes in the inside line he would no doubt cause more damage but in truth much of Murphy's best contributions from play come from further afield. In the 2012 campaign he scored just 1-3 from play, and last summer only 0-5. In eight league games this year he scored just 0-6 from play, and has only 0-2 so far in four championship games (both versus Derry).

In the second half against Monaghan, particularly early on, he upped it a notch with four key involvements in five minutes, and 11 in total during the half as possession and with that momentum swung.

In the first half eight Monaghan players were playing keep-ball within 60 metres of the Donegal goal, with two more players behind them if they needed an outlet.

Their sweepers were in place and they had numbers pushed up to go man-for-man with the Donegal runners if a turnover was made. Donegal sat back in their own 45 and were left isolated on the counter.

Monaghan were holding possession for an average of just less than 40 seconds. With the teams level on three points each, they held the ball in one move for one minute and 20 seconds, incorporating seven handpasses, six kick passes, and three 180-degree changes of direction while well inside the opposition 45 metre line – that all resulted in an Owen Duffy point which summed up their first-half tactics.

Donegal looked leggy, unable to sustain their high-tempo tackle or counter-attacking game with the ball being transitioned so quickly in front of them, from side to side.

In the final 15 minutes of the first half Monaghan held possession for six minutes and 30 seconds, that showed as they outscored Donegal 0-5 to 0-1. Three of those points came in the final five minutes. In the second half Donegal likewise outscored Monaghan, by now opting to sit on their lead, 0-3 to 0-0 in the final 10 minutes.

So while the temptation remains to put Murphy in at 14, he may be needed more than ever out the field as Donegal seek to rectify their mistakes and re-take control of proceedings by retaining more possession - starting against Galway.