GAA Statistics: Gaelic football is a young man’s game – on and off the field

What are the ingredients for a top intercounty manager? What's changed in Mickey Harte's 14 years... 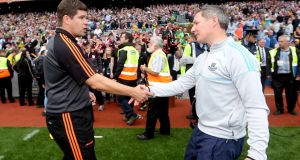 Football is now a young man’s game, they say, and that doesn’t just go for the players. The men on the line are starting young and not sticking around either.

Mickey Harte is now an exception to the rule. But how much have those rules been bent since he started out in 2003?

Thirteen years ago the average age of the eight managers in the senior football quarter-finals was 51. Harte, who was in his first season over Tyrone, was aged 51.

He was in rich company, too. Mick O’Dwyer, Brian McEniff, Páidí Ó Sé, John O’Mahony, Joe Kernan were all still knocking about. Six of the eight managers had managed their respective county to All-Ireland glory.

This year that average age is down to 47. Harte is three years younger now than a 67-year-old O’Dwyer was back then when the Kerry legend led Laois to the Leinster title.

The youngest manager back then – in just the third ever series of football quarter finals after the introduction of the qualifiers – was 41-year-old Dominic Corrigan.

This year three of the five managers battling it out in the last eight are under 40. And after the exit of Harte’s Ulster champions, and Colm Collins’s Clare team, the average age for the managers of the semi-finalists is now 44.

With the drop of age so too comes a drop in experience.

While six of the eight in 2003 had already won Sam Maguire (some on multiple occasions), this year that figure is down 50 per cent.

Only Harte, Kerry manager Éamonn Fitzmaurice (who only 10 years ago was winning Sam Maguire as a player) and Dublin’s Jim Gavin have senior All-Ireland titles on their CVs.

In fact, independent of those three, the other five managers have mustered only two provincial senior titles between them.

So, does that mean then that you need experience on your side to achieve success as a manager? Not exactly.

Take for example Fitzmaurice and Gavin. They won their first All-Irelands as managers aged 37 and 42 respectively.

The average age of All-Ireland-winning managers stretching back the past three decades – from O’Dwyer’s last in 1986, to Gavin’s second last September – is a relatively young 45.

That’s almost 20 years younger than Tyrone’s three-time All-Ireland winner Harte. And nearly a decade older than a host of managers nationwide who have come more or less straight out of playing careers and onto the hot seat.

No more so, though, than the likes of O’Dwyer, or Billy Morgan in Cork, did before them.

Interestingly, of the last 18 All-Ireland-winning managers, the average number of years that passed from the beginning of their term to them realising their All-Ireland dream was just over two.

Eight of those 18 took three seasons to seal the deal. However, six took just one year.

Of this year’s quarter-finalists, the managers, on average, are into their fourth season this summer. Harte’s 14 years in the job is the real outlier.

Without him, the other seven are, on average, into their second season.

In terms of the picture nationwide, of the 33 county managers who started this summer’s championship – they are also into their second season on average. And over a third of them (12) are only in their first seasons.

Instant success though, as already shown, is possible.

Five-year plans remain exactly that but there’s nothing like a fresh voice to make a sudden impact.

All of 83 per cent of the last 18 managers to lift Sam did so during their first senior intercounty job.

Another aspect of these successful managers is that in the 30 years recorded, only John O’Mahony during his tenure with Galway would lift the football title as an outside manager.

Nonetheless, 12 of the 33 managers who are in charge in the 2016 season are outside managers. Two are managing Division One counties, one is in Division Two, while the rest are running ship in the lower divisions.

So, what sort of profile should county boards be targeting as they look for a man to lead their senior teams?

Well, the Mickey Harte of 2003 would be pretty much bang on. Not too young, still far from being ‘over the hill’, not an already experienced county manager. Fresh into the job. In charge of his own county.

Men like himself are a rarity in any sport, so successful for so long – but they’re good starting points.

And as the likes of Gavin, O’Mahony, Ó Sé, and Jack O’Connor have also done, Harte built off under-21 success. Others came via the backroom management route – Fitzmaurice and Conor Counihan, for example.

Over the past 30 years, however, Joe Kernan is the only All-Ireland club-winning manager to subsequently lift Sam Maguire.

There’s no one-for-all fit, but there’s no doubt that successful trends are there to follow.

As for the optimal age and profile of a hurling manager – Brian Cody is, what, 62 this year? That should do.