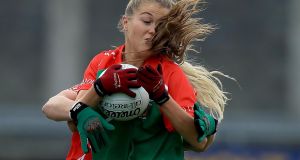 Ephie Fitzgerald admitted that collecting his first piece of silverware as Cork manager came as a huge relief.

Stepping into the shoes of Eamonn Ryan was never going to be a simple task but Fitzgerald has carried on the trophy-winning tradition at Parnell Park on Saturday as Cork powered to a fourth successive Lidl Division One crown.

It was Cork’s 10th League crown in 12 seasons and they had to grind this one out.

Orla Finn was superb for Cork, scoring five of her six points in the second half, and three from play.

The Leesiders roared out of the blocks and were 1-3 to 0-0 clear within 10 minutes.

Mayo managed to get within three points in both halves but never closer as Cork warmed up nicely for next weekend’s Munster championship opener against Waterford.

Cora Staunton kicked some picture-book scores for Mayo but this was yet another disciplined defensive display from the champions, as they coughed up just eight points from play over the hour.

“It’s obviously a bit of a relief,” said Fitzgerald. “It was a fair battle, more of a war of attrition than anything. It was a tough, hard, physical game.

“Overall, I thought it was played at real championship pace, real end-to-end stuff.

“It’s my first piece of silverware and to win a National League, we don’t take these things lightly in Cork. I think it was important for the girls as well, with the change of management. All in all, we’re delighted.”

Mayo boss Frank Browne said: “I have to take my hat off to the girls – they gave everything they have and what else can you ask people to do only that? Every one of them, you have to be proud of them.