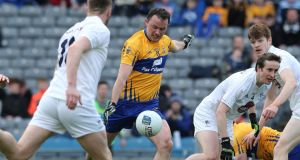 Colm Collins’s side were considerable underdogs entering the contest but came good at the death, wiping out a three-point deficit with 69 minutes on the clock to win with a flurry of late scores.

Dean Ryan’s 70th-minute goal for Clare tied the sides up for the seventh time in an epic affair and they were level once more before Cleary converted a 77th minute free to win it.

Both sides finished with 14 men as Kevin Feely was red carded for Kildare in the 58th minute and Clare’s Graham Kelly was dismissed in injury-time.

David Tubridy finished with 1-5 for the Munster outfit while Cleary tallied 0-5 in a win that will send them into their Championship clash with Limerick on the last weekend of May in positive mood.

It was a rare Croke Park outing for Clare but they never looked out of their depth.

Neil Flynn finished the first-half with 1-4 for Kildare but Tubridy went one better with 1-5 for Clare.

It was great entertainment in front of 8,362 as both sides tore into each other from the off.

Kildare edged their group match by five points earlier this month and led for most of the first half again.

But Tubridy’s goal a minute into injury-time sent Clare in at the break with a slender 1-10 to 1-9 advantage.

Flynn is a huge talent for Kildare and shot 10 points in the recent Leinster U21 final defeat to Dublin.

The corner forward got Kildare off the mark early on and his seventh minute goal was a corker.

He soloed in along the left endline before selling a clever dummy to goalkeeper Mark Donnellan and blasting to an empty net.

Kildare were on fire at that stage and hinted at a rout as they led 1-5 to 0-2 at a venue they know well.

But resurgent Clare wiped out that six-point deficit by half-time and opened up with some terrific football themselves.

Captain and Man of the Match Gary Brennan did well to field Keelan Sexton’s ball in and lay off to Tubridy who fired low to the net.

The thrill-a-minute ride continued throughout the third quarter with the sides swapping scores and levelling the game on four separate occasions.

Kildare finally moved two points clear at 1-15 to 1-13 thanks to points from Flynn and Fergal Conway.

But they lost two key players soon after. First to go was Adam Tyrrell who limped off injured after kicking six points and Feely was dismissed for his second booking 12 minutes from time.

Kildare led by one point at that stage and it remained that way with nine minutes to go despite a fine point from Clare dual star Podge Collins, a half-time substitute.

Kildare held onto possession well and frustrated as they pounced with two Paul Cribbin points to move 1-18 to 1-15 ahead entering injury-time.

But Clare had saved one last kick for the finish and Ryan’s goal levelled it up after great work again by Brennan with the pass across goals.

Clearly ultimately kicked the winner though Flynn still had an opportunity to level it from a long range free but dragged it wide.