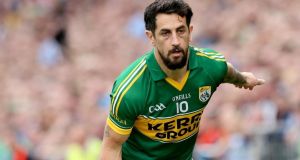 Kerry manager Eamonn Fitzmaurice has confirmed that former Footballer of the Year Paul Galvin will not be returning to the Kerry senior team, bringing an end to his intercounty career .

Galvin was not involved in Sunday’s Walsh Cup defeat to Clare at Fitzgerald Stadium on Sunday. The 36-year-old retuned to the Kerry fold last year having first retired after the opening game of the 2014 Allianz League campaign.

His final game for the Kingdom was last September’s All-Ireland final defeat to Dublin, where he came off the bench to replace David Moran after 57 minutes.

Galvin won four All-Ireland titles, three national league titles and three All Star awards, including being named as Footballer of the Year in 2009.

Asked about the return of senior players ahead of the start of the Allianz League, Fitzmaurice said: “Paul won’t be back, he is finished up. He got married and is moving back to Dublin. Other than that everyone else will be back.”

Fitzmaurice had good news to report on Colm Cooper’s return from a shoulder operation, but James O’Donoghue, who has also undergone shoulder surgery, faces a longer recuperation period.

“The longest will be James, the shortest will be Colm, who will return in the next week or two. Colm just needs to get up to speed with regard to contact. We will gauge where everyone is at when we get back training.

“If we can advance to the knock-out stages, he is a possibility for that. The rest of them fit into the March bracket where we would be expecting them back in March. The two Geaneys, Peter Crowley and Anthony Maher. ”