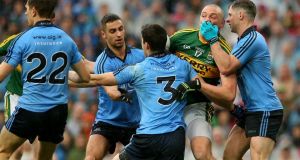 For a long time, this game was talking out of both sides of its mouth. You had a hunch that Dublin had more about them but the scoreboard kept telling you that there was nothing between the sides.

Ten minutes short of half-time, the scores stood level at 0-4 to 0-4 and Dublin hadn’t kicked a point from play since the first minute.

What we didn’t know then but soon came to realise was that the game was only giving Kerry a bit of plámás.

Once the talk got real, we soon knew where we stood. Dublin kicked four points without reply in those 10 minutes up to the break and while the weight of them was hard enough for Kerry to bear, it was the method of delivery that really buckled their knees.

Bernard Brogan, Jack McCaffrey, Paddy Andrews and Philly McMahon sent over rat-a-tat scores that smuggled within them the key to the day.

Because above all else, this was a win made in the Dublin defence. Take out Brogan’s point – a fortunate one for Dublin as the ball squirted to him thanks to what looked like a foul on Fionn Fitzgerald – and the other three of that quartet either started or ended life in the less celebrated hands of the Dublin back numbers.

They took Kerry’s screen idols and turned them into cinema ushers.

However, after Brogan’s point put Dublin a point up, it was McCaffrey who wriggled free to double the lead with a smooth kick from the right-hand side.

Three minutes later, Andrews hoisted one of his own after a move that started with Denis Bastick affecting a turnover on Dublin’s 45.

But the killer blow was McMahon’s. The first half had leaked into injury time when he collected possession out under the Hogan Stand, in front of the Kerry bench.

Between him and the goal stood Colm Cooper, putting in a shift for his team by tracking back. The greatest forward of his age was back-pedalling, showing McMahon one way and hoping the Dublin corner back didn’t jink the other. It was like watching a great novelist trying to read sheet music.

McMahon’s shimmy bought him a yard, his kick split the posts and Dublin went in four ahead.

They had taken the best thing about Kerry football and turned it against them, making attackers defend and trying to keep the markers marked. It was a piece of footballing jiu-jitsu that would have made UFC fan purr.

“I suppose if he was any other player, everybody would be talking about him getting Player of the Year to be honest,” said Dublin selector Declan Darcy of McMahon. “I know he has that kind of hate thing to him, that kind of Ryan McMenamin thing going on. But at the same time, he’s been huge for us.

“As we went through the year, we gave guys jobs to do and developed different systems of play. It was a really big task for Philly to go on Aidan O’Shea and it took a big trust from us to do it. But he took to it manfully.

“That contest with Aidan O’Shea was fantastic and he stood his ground really well and it was the making of him.

“It was a huge, huge turning point for us because at times Philly can go off on his own a bit and maybe go forward and kick a point and maybe get away. But I think his overall game this year has been fantastic.”

McMahon was beaming afterwards, a job done and another medal locked away. Although it looked like Cooper refused to shake his hand afterwards, the Ballymun defender assured us there were no hard feelings.

Cooper’s thoughts on the matter after a game where he had to listen to a constant stream of yap in his ear would be interesting to say the least. McMahon won’t lose a lot of sleep though.

“Oh, we shook hands, yeah. But look this is football, you do what you have to do when you’re on the pitch and then after the game you shake hands. That’s the great thing about GAA. You have to mark the best to become a better player. Colm Cooper is one of the best in the game and I was thankful he was there for me to mark today.

McMahon played his part, McCaffrey and James McCarthy too. Expressing themselves was one part of it, shutting Kerry down was another. None of the starting Kerry half-forward line scored a point. Stephen O’Brien was gone at half-time, Johnny Buckley not long afterwards.

“Obviously after last year, we were caught out defensively,” said McCarthy, a notable presence in the Dublin attack himself at times. “They did us for three goals. And maybe during the year we were playing too cagey, if you like.

“We’re still trying to hold our defence but I think just after the Mayo game, we said, ‘Look, we’re going to go for it and not have regrets about it’. Put them on the back foot a bit but obviously not forsake our defensive duties, but drive forward if we could.”

They could and they did. In the end, it was like holding a mirror in Kerry’s face but just tilting it slightly so they got blinded by the glare.