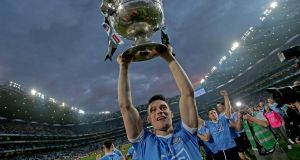 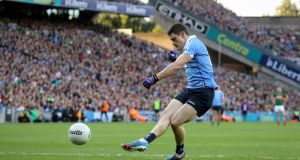 What a cruel and wonderful GAA world we live in. Dublin have retained the All-Ireland. The first county to keep Sam Maguire since Kerry in 2007.

There’s so much more: this modern dynasty have now surpassed the great side Kevin Heffernan offered to Hill 16 in the 1970s.

These Dublin boys have four All-Irelands since 2011. Heffo’s unsmiling men only won three.

Sons passing out their fathers. As it should be.

“This is what football is all about,” said Philly McMahon. “Two teams bringing the best out of each other.”

It is football but this was a war.

And another All-Ireland final to haunt Mayo people. The decision by manager Stephen Rochford to drop his No 1 David Clarke from draw to replay back-fired spectacularly.

Come to the 36th minute with us: Diarmuid Connolly is apoplectic.

Screaming at Maurice Deegan. “A card! A ******* card!” Connolly is roaring and gesturing, inches from the referee’s beak. The Stradbally man seemed genuinely frightened. Of course he was nothing of the sort.

Scroll down for more Connolly.

Presumably Deegan has had nightmares about All-Ireland final replays descending into open warfare like this did in a 44 minute first half.

Chaos was only marginally replaced by a marvellous sporting spectacle.

Anyway, Deegan was not afraid to brandish his notebook. Jonny Cooper – with 19 minutes clocked and well on his way to being man of the match – walked for grabbing Donal Vaughan’s ankle.

Dublin under Jim Gavin don’t mess about. David Byrne instantly raced into the fray to ensure Cillian O’Connor didn’t have a blade of grass to himself. Rapid thinking from the Gavin machine.

Poor Lee Keegan. A while before his black card, Keegan took an awful belt from his old pal Connolly that Tyrone linesman Sean Hurson could not have missed. Hurson also saw John Small haul down Andy Moran. We know because he told Deegan about it.

Maybe the referee wanted to see his black cards for himself.

Keegan walked after 35 minutes when another dodgy Hennelly kick out (scroll down for more Hennelly) that Dean Rock, the unerring Dean Rock, broke for the onrushing Connolly.

Keegan dragged him down. Diarmuid went apoplectic as their engrossing mano-a-mano came to a premature conclusion.

Rock brought his tally to 0-8 with his sixth free. Barney’s son was himself again. Almost flawless, finished out with 0-9. Gave Keith Higgins an awful time. Especially after his two scores from play.

The animosity born of familiarity reached a new low here.

We should tell you about the game itself, the reel of scores and eventually Deegan’s spray of three yellow cards just before they disappeared under the Hogan stand.

There was even a preamble littered with rumours. Some true, some not.

Bernard Brogan had been dropped for Paddy Andrews while Paul Flynn moved to midfield instead of Michael Darragh MacAuley as Paul Mannion also started. Byrne made way for Michael Fitzsimons, who was superb at corner back and was named man of the match.

All six of them eventually ran about this vast green field.

Most surprising of all was Hennelly in the Mayo goal as Clarke was dropped. Dublin hammered Mayo for his inaccurate kick-outs.

They also started like the juggernaut they are. Rock had 0-3, ignoring a goal opportunity, before Mayo could draw breath while Kevin McManamon dismissed his form from the last day with a typically efficient score.

Mayo were being overrun. Of course they know not how to die. They responded with 0-4 of their own. Cillian O’Connor refused to blink from frees, until he did when it mattered most (scroll down), while Andy Moran turned Cian O’Sullivan inside then out to kick a gorgeous point.

Dublin eased clear again – Rock, always Rock – until Keegan told Connolly he’d be back in a second. The wing back suddenly appeared on Aidan O’Shea’s shoulder, after the otherwise anonymous Breaffy giant got in front of O’Sullivan, to slide a lovely shot into Stephen Cluxton’s right corner.

0-8 to 1-5. All square and pandemonium was promised. You could see it brimming all over the place.

Rock made it 0-10 to 1-5 after Keegan exited the stage. O’Connor kept Mayo apace to leave one between them at the break.

Then Connolly met Donal Vaughan. Connolly clipped him, Vaughan turned and took a run at Connolly. It was like a lorry smashing into a wall. Vaughan didn’t reappear for the second half.

Deegan had his head turned as another mill broke out 50 metres away when Small body slammed himself onto O’Connor.

Deegan talked to his officials before flashing three yellows. Wise decision. The officials needed the break as much as the players.

Mayo came back for the second half possessed with the zeal of champions. Diarmuid followed his brother Cillian onto the score sheet.

Then Flynn lobbed a ball towards Andrews that any intercounty goalkeeper worth his jersey should handle without fuss.

Hennelly dropped it. Not finished yet, Hennelly pulled down Andrews.

Of course O’Connor responded for Mayo.

The tension was unbearable. Brogan arrived.

McManamon hared up field and looked certain to deliver one of his Croke Park specials until Brendan Harrison picked his pocket.

Mayo refused to go quietly. Never. After a scoreless nine minutes Kevin McLoughlin pointed. Then Patrick Durcan hit one from the gods.

But Brogan gave Dublin a two-point lead with 54 minutes played.

The champions have ammunition the likes of which Gaelic football has never seen. Cormac Costello came in from the cold to land two quick points.

Dublin by three. 10 minutes to play.

Ball after ball was dropped into Aidan O’Shea but each time he was hounded by blue clad men and disposed.

Mayo had to rely on O’Connor frees as Dublin kept closing the door in their face.

He made it a two-point game as they turned into the home straight.

Through it all Gavin sat serenely in his control chair, occasionally talking into his microphone or Mick Deegan’s ear as the selector raced about with orders.

Flynn gave O’Connor his easiest chance of all when jumping into a throw-up.

All Mayo now. Conor O’Shea, the youngest of the three brothers all out there together, took aim but the ball only found Cluxton’s gloves.

Watching through fingers now, Fitzsimons made a block he knew nothing about to deny McLoughlin.

Dublin kept playing the Dublin way. Byrne put a foot pass across his own defence neatly onto Brian Fenton’s chest.

Just as six minutes of injury time was announced, Costello lashed over his third point despite a Mayo man hanging from him.

Calling Mayo chokers feels wrong. But we saw it again. O’Connor brought it back to the minimum before fate, yet again, the ’51 curse, whatever you like, came back at them.

Costello fouled Patrick Durcan from behind. Free from wide on the left, about 40 metres out.

O’Connor stepped up. No good.

Dublin survive a thriller as Mayo return to dark rooms in their house of pain.

“This is for everybody,” said Connolly. “Ah, just put it in the corner and walk away. We weren’t going to defend the All-Ireland we were going to attack it and win it.”