Dublin power their way past Meath for Leinster title 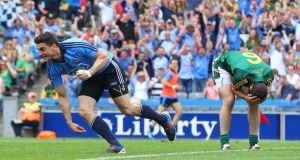 Three down easy, three to go, as Dublin’s imperial march towards their All-Ireland defence continues.

A ninth Leinster football title in 10 years - a fourth in succession - and once again at the expense of one-time close foes Meath: although rarely as convincing or as devastating as this.

In the end, no one in the bumper 62,660 attendance in Croke Park this afternoon could doubt they had once again witnessed the most prolific football team in the country.

To think some young Dublin supporters were born into this.

And unlike their previous two outings this summer, Dublin were off on the B-of-the-Bang. Indeed the writing was on the hill well before half-time, as Dublin helped themselves to a nine-point advantage in the opening half, while Meath’s challenge slowly but surely faded away. Only the proverbial hammering awaited.

One-time super-sub Kevin McManamon was running riot - either setting up scores, or taking them on his own, and he finished the first half with four points from play.

McManamon followed that with a typically explosive goal just four minutes into the second half - dropping his marker, Pádraic Harnan, with too much ease. When Dublin followed that with two points in quick succession from Bernard Brogan and Jack McCaffrey the margin was up to 15 points. Meath were stunned into surrender, without much heart to fight on.

With that Dublin manager Jim Gavin emptied his bench, and substitutes Eoghan O’Gara, Cormac Costello and Dean Rock added 1-3. O’Gara’s goal came on the hour mark and extended Dublin’s advantage at that stage by 20 points, 3-19 to 0-8.

Meath’s meagre response and perhaps most impressive score of their game came too late to make any impression, the non-consolation goal from Mickey Newman, who took a ball from David Bray.

So, Dublin captain and goalkeeper Stephen Cluxton lifted another Delaney Cup with the look of a man who was going through a daily routine, not so much an annual one.

“Once again thanks to the management, who put in such a phenomenal effort,” said Cluxton. “And to Meath, we were very, very worried coming into this game. We did our homework on you guys, and respect you guys. It wasn’t your day, but we expect you to have your day soon.”

Yet talk of Meath’s increased physicality this season soon evaporated in the warm humid air, as Dublin exposed their limitations all over the field - especially around midfield, where Michael Darragh Macauley ran himself into acres of space. At the same time Dublin were winning kick-outs almost for fun.

Just before the 20 minute mark they hit Meath where it hurts, McManamon’s sweet shot bouncing off the upright and back into the path of Bernard Brogan, who pounced with typical deftness to boot the ball into the net - in front of Hill 16 too. Dublin were up 1-6 to 0-2, and already sailing.

There was some controversy when Meath had a goal called back on 25 minutes, after Dalton McDonagh had passed off Stephen Bray. Armagh referee Pádraig Hughes had blown for the foul, and reckoned the advantage had gone. Bray still finished into the net - which would have brought Meath back to within three points - but it didn’t stand.

So, even if Dublin only added one point in the last 10 minutes, from O’Gara, it made for perhaps Dublin’s easiest of the 53 Leinster titles in all.

The only question after this is what other team can possibly stop their imperial march, as Dublin are now just three more wins away from a third All-Ireland title in four years.

“I think we’re just desperately disappointed with our performance,” said Meath manager Mick O’Dowd. “Because I don’t think it reflects where we are out. Having said that Dublin are at a higher level again, and they are a step on again from last year, when you think there were a couple more chances they didn’t take.”

1 Stirling and Balbirnie tee off to tee up another famous Ireland win over England
2 Seán Moran: Boylan documentary offers a compelling insight into former Meath boss
3 RG Snyman primed for hectic run with Munster and South Africa
4 ‘A win like that is special and one we’ll remember forever’ - Ireland skipper Balbirnie
5 Stirling and Balbirnie inspire Ireland past England, European football resumes
Real news has value SUBSCRIBE