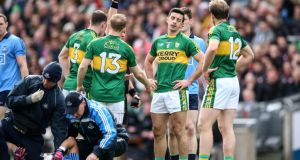 It was appropriate on a day of commemoration that the doomed attempts of an ancient culture to break the shackles of contemporary empire should end up in shattering defeat. Kerry’s footballers at least have the consolation that they are - even by the exacting standards of their public - unlikely to be taken out and shot but there’s a long struggle ahead.

Dublin, with the jubilant nonchalance that attends the mounting successes of Jim Gavin’s management - now running at 90 per cent of all available league and championship silverware - took Kerry’s apparently stylishly re-modelled challenge and returned it to them in little pieces.

Like last September’s All-Ireland this was for long spells a match in which their superiority was little reflected on the scoreboard and on this occasion that wasn’t because of appalling weather. A bright sunny afternoon with a record crowd - enigmatically described as a ‘full house’ rather than in the conventional numerical idiom but clearly in the region of 80,000 - provided the perfect stage for the counties.

Kerry stayed within range for most of the match without ever suggesting they were going to actually catch up even though Dublin spent a dysfunctional phase of the second half squandering possession and failing to turn territory into even scoring opportunities let alone scores.

On at least six occasions they moved purposefully up the field, passing and running into position only to return empty-handed as Kerry gratefully turned over possession and kept in touch.

Dublin’ however, kept pressing and in an explosive final quarter of an hour out-scored their opponents by 2-5 to 0-1. In this they were undoubtedly helped by Kerry’s being reduced to 14 after a hit by Aidan O’Mahony on Jonny Cooper led to the veteran defender’s 49th-minute red card - his second early departure from big matches against Dublin after last September’s black card.

In the end Eamonn Fitzmaurice’s team just couldn’t keep up and although the goals were mistakes, the team was creaking. A moment’s hesitation from replacement defender Jonathan Lyne in securing Brendan Kealy’s short kick-out allowed Paul Flynn nip in, take possession and drive the ball into the net in the 66th minute for a 1-17 to 0-13 lead.

Well into injury-time Bernard Brogan - another admirable day behind him with 0-4 in his bag - was still sufficiently alert to react most quickly to another shot by Flynn, which came off the post and lay on a pass for Eric Lowndes to shoot the second goal.

It wasn’t by any means a complete performance by the winners, who equalled the record of four successive league titles, but in its pace, relentlessness and intent this 11-point win was enough to stamp Dublin’s authority all over the preliminary phase of the season, which has seen them return a 100 per cent record over the nine matches of the Alllianz Football League Division One campaign.

There were however reasons for Gavin and company to be especially satisfied. Ciarán Kilkenny finished another fine afternoon as TG4’s Man of the Match, his constant movement and ball winning as well as two points proof of consistent involvement in a fitting finale to a fine campaign.

Like in last year’s final for instance, the centrefield combination of Brian Fenton and Denis Bastick were too strong for Kerry.

Fenton, after a dream rookie season, has looked like kicking on this year and gave a complete display winning ball in the air, disposing cleverly and accurately - it’s hard to think of a single instance of his giving the ball away - and also putting in deft tackles.

The big question mark for the holders this year has been the departure of Rory O’Carroll, the best full back in the contemporary game, and the current Footballer of the Year Jack McCaffrey and the impact that would have on the defence.

Cian O’Sullivan demonstrated once again his phenomenal ability as a defensive organiser and later in the match when required, as a man marker on Kieran Donaghy but he was well supported, especially by James McCarthy - Dublin’s player of the league - who used his pace to control much of what went on in the half backs and even take a turn marking Colm Cooper.

Cooper was one player who registered improvement on the All-Ireland, taking a modicum of revenge on Philip McMahon by dummying his tormentor of seven months ago to shoot a nice point from the right wing in the 17th minute. This was part of an cautious, tit-for-tat exchange of scores for much of the first half when Kerry looked capable of matching Dublin even if their greater economy suggested it was taking more out of them.

Stephen O’Brien had two points before David Byrne got to grips and it wasn’t until nearly half an hour had gone that Dublin began to get a stretch on the scoreboard to match their growing superiority. Peter Crowley, who marked the returning Diarmuid Connolly effectively, was actually Kerry’s joint top-scorer from play with two points.

Overall though, Kerry’s attempts at fluid defending were inhibited by their lack of pace, as Dublin thundered up the field and although Paul Murphy’s reinvention as a linking centre-forward had its moments - as when he transitioned a move from defence into O’Brien for a point - he needed some similarly mobile back-up.

Dublin had the luxury on the hour of seeing Dean Rock send a penalty - for a foul on the impressive Paul Mannion by Shane Enright - over the bar and were also able to bring in former Footballer of the Year Michael Macauley for his first appearance since the All-Ireland.

Kerry might have been unlucky to see the roof fall in at the end of the match but in truth it had been creaking for most of the previous hour.