Monaghan show meath how it’s done in Clones, as Derry leave Killarney with a win 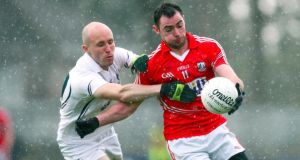 Dublin continued to hit the ground running in their defence of the Allianz National League Division One title.

Having opened their campaign with a narrow win over Kerry in the opening series of matches, Jim Gavin’s men made the trip up the M4 to face Westmeath, newcomers to the top flight, and emerged from a 0-14 to 1-7 win in Mullingar.

Cork also secured a 100 per cent start to the season with a 0-16 to 1-12 win over Kildare at Páirc Uí Rinn, while Tyrone – with two goals from Damien McCurry – had a 2-15 to 0-15 win over All-Ireland finalists Mayo and Derry maintained their strong start to the league with a two points winning margin over Kerry in Killarney.

Dublin, the current All-Ireland and league champions, had to work hard for their victory with Ciaran Kilkenny playing an influential role in pulling the strings. However, it was the introduction of substitute Paul Hudson, who claimed four points (three from play), which effectively proved the difference.

Having faced the wind in the first-half, Dublin reached the break 0-6 to 0-3 in front and should have made their dominance more clear cut on the resumption only for Westmeath goalkeeper Darren Quinn to brilliantly save goalbound shots from both Michael Dara McAuley and Paul Flynn.

Veteran Westmeath forward Dessie Dolan showed how to finish when, with his first touch after his introduction as a substitute, he held off McAuley and slotted home past Stephen Cluxton to level the match – 1-4 to 0-7 – before a John Heslin point edged the home side in front.

Briefly, a huge upset seemed on the cards. Thereafter, Dublin upped the gears and four unanswered points – two from Hudson, one from Kilkenny and Cluxton’s third point of the game – moved Gavin’s side clear and, although Heslin got another point to briefly stop Dublin’s momentum, the strength of the visiting side’s bench was demonstrated when further points from Davy Byrne and two from Hudson tied up the loose ends.

Cork trailed Kildare by 0-8 to 0-7 at half-time but, for the second week running, turned in a strong second-half performance to retain their place atop the table.

In a free-flowing game, substitute Cathal Vaughan made his presence felt with a number of good scores in the second half as the Leesiders – with John O’Rourke impressive – maintaining their 100 per cent start.

Kildare got an injury time consolation goal from Cathal McNally.

Derry made the long journey to Killarney a profitable one with a well-earned 0-16 to 0-14 win with Emmet McGuckian having a fine game and a late Mark Lynch free giving the visitors a winning cushion.

Damien McCurry proved to he the thorn in Mayo’s sides as the Tyrone attacker twice found the back of the net to give Mickey Harte’s side a 2-15 to 0-15 win over Mayo at Healy Park in Omagh.

Tyrone led 1-6 to 0-4 at half-time but only saw the winning line when McCurry’s second goal in the 65th minute killed off Mayo resistance.

In Division Two, Laois played the entire second-half with only 14 men after Conor Meredith was sent off for an off-the-ball incident on the stroke of the half-time whistle.

Meredith had scored Laois’s second goal of the opening half – the first coming from Ross Munnelly – as the midlanders led 2-4 to 0-5.

Louth came more into the game with numerical superiority after the break but couldn’t salvage anything from the game, with Laois getting home by 2-8 to 0-11.

The most remarkable result of the day came in Clones where Ulster champions Monaghan totally outplayed Meath, claiming victory by 0-20 to 0-8.

Meath only mustered one point in a dismal first-half for them, at which stage Monaghan – with Ciaran McManus the dominant scorer – led by 0-13 to 0-1.

Donegal made it two straight wins in Division Two with a comfortable seven points win over Galway, 1-16 to 0-12.

Colm McFadden, part of a Donegal full-forward line that tormented the Tribesmen, grabbed the only goal of the game while Paddy McBrearty nabbed three points on his introduction as a substitute.