Donegal should have too much for Derry

Rory Gallagher’s side look too settled, too experienced and too in tune to be stopped 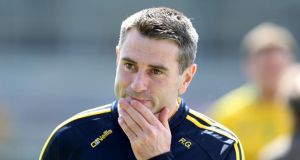 Monaghan are the only team they’ve lost to – everyone else they’ve beaten at least twice. Tyrone have been for the chop four times, Derry will join them if this Ulster semi-final pans out as expected.

Any reason it shouldn’t? None that are obvious. Derry have only beaten Donegal once in seven meetings since 1998. In three games the Jim McGuinness teams scored 0-11, 0-9 and 0-8 and Derry never got closer than within three points of them.

But the real problem is that Donegal are coming in on the back of form that is well beyond decent. Their destruction of Armagh was the sort of result that isn’t supposed to happen in the Ulster Championship and it gave the naysayers a look at what a post-blanket world might look like. Thrilling to watch, structured but inventive. The work of a group in which everyone is playing a couple of moves ahead.

In opposition, Derry have perfectly decent players but if they have the gameplan to beat Donegal, they’ve kept it well-hidden. Contrast the way they allowed Down to stay dangling in the game when a man short and four behind with the clinical brutality of Donegal against Armagh.

In Derry’s favour, they’re not remotely as bad as their relegation from Division One painted them. On his worst day, Fergal Doherty will still control a reasonable share of the centrefield ground. Dermot McBride will, at the very least, ensure that Patrick McBrearty doesn’t enjoy his afternoon.

Rory Gallagher’s Donegal have looked a mite more susceptible to goals than McGuinness’s did – Darren McCurry’s one for Tyrone would have been unthinkable under the old regime.

But we’re reaching here, clearly. Donegal just look too settled, too experienced and too in tune with each other. It would need a serious off-day to keep them out of a fifth Ulster final on the spin.

Injuries: Derry were hoping to have Patsy Bradley and Gareth McKinless at least back on the bench but neither of them have made it. Donegal have Colm McFadden back.