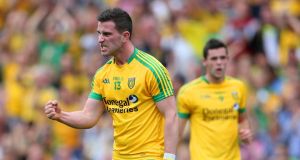 Since the 2013 encounter between the counties fortunes have ebbed and flowed but overall Donegal look in better shape. They mightn’t be the defending All-Ireland champions like they were two years ago but they were finalists last September and don’t come into this with a filing cabinet of injury concerns.

On the other hand Tyrone look in poorer shape. Since then, retirement has claimed genuine legends Conor Gormley and Stephen O’Neill as well as another accomplished All-Ireland medallist in Martin Penrose. Whereas they tweaked Donegal’s nose in the league in Omagh two years ago, this spring they were rolled over on the same field they will occupy tomorrow.

Donegal had a steady league and can point to a couple of significant developments in their favour. The form of Patrick McBrearty up front and Neil Gallagher in centrefield and Odhrán MacNiallais has been exceptional.

The negatives are that Colm McFadden is still not reclaiming the form of three and four years ago and has been named on the bench tomorrow whereas the team general, Michael Murphy, said to be in impressively slimmed-down condition, has developed an unfortunate habit of picking up black cards. His free taking from virtually anywhere remains formidable though.

Tyrone have a few alibis for a league season that saw them relegated while Donegal were making the play-offs. They struggled in the three matches against Ulster opposition but lost only one of the matches against everyone else, Kerry, Dublin, Mayo and Cork, who beat them by a point, and were unlucky not to take both points in Croke Park.

It will emerge whether playing against blanket defences in the league was the issue against Monaghan and Donegal, whatever about Derry but there was another factor in each - vile weather and downpours, something that doesn’t favour Tyrone with their lack of heft and ball playing instincts.

Donegal thrive in it, however so there’ll be anxious eyes on the weather front.

There may be changes to the announced Tyrone line-up but Niall Morgan is likely to remain on the bench even if the goalkeeper is fit again, as replacement Michael O’Neill has the confidence of the selectors to do the job, his kick-outs having greatly improved.

Seán Cavanagh spearheads a useful full forward line but that is the zone that Donegal most like to dominate and on either side Darren McCurry and Connor McAliskey will need to improve the team’s shooting efficiency in this fixture.

Tyrone’s re-embrace of the blanket could mean that this will end up looking like an animal laboratory with nearly all players behind the ball on a regular basis. It’s by no means clear that this will a comfortable outcome for Donegal but they have home advantage and an experienced team. That should do it but it’s likely to be closer than expected.

THE LOWDOWN
Last meeting: 2013 Ulster quarter-final, Ballybofey, Donegal 2-10, Tyrone 0-10.
Odds: Donegal 1-2, Tyrone 12 -5 and 13-2 the draw.
Injuries: Tyrone goalkeeper Niall Morgan injured his groin when the counties met in the league last March and hasn’t played since although he is named in the weekend’s match-day panel
Suspension: None.
Just the ticket: According to the Ulster Council the few remaining tickets available were expected to sell on Friday and none will be available on match day.
Verdict: Donegal to win.

1 ‘For 25 minutes I ran out of oxygen’: Pepe Reina on his coronavirus battle
2 Rory McIlroy admits Portrush nightmare was catalyst for his return to the top
3 Garry Ringrose to stay with Leinster as he signs two-year central contract
4 Jack Grealish ‘deeply embarrassed’ after visiting friend’s house during lockdown
5 Money, domestic violence and CTE: Roger Goodell's NFL reign
Real news has value SUBSCRIBE

Garry Ringrose to stay with Leinster as he signs two-year central contract 00:00
Rory McIlroy admits Portrush nightmare was catalyst for his return to the top 21:00
FAI moves to defer portion of salaries as Fifa ponders cash support 20:30
NFL votes to expand postseason following cancelled annual meeting 20:21
‘For 25 minutes I ran out of oxygen’: Pepe Reina on his coronavirus battle 20:06
Crossword Get access to over 6,000 interactive crosswords