Donegal inflict another defeat on Kerry 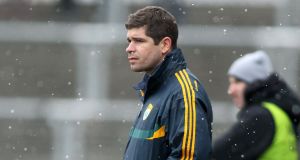 Everybody has a handy cure for the hiccups, the only problem being none of them seem to work. That's four big hiccups now for Kerry football, and still no apparent cure.

Not that Donegal will be worried - the All-Ireland champions easing any relegation fears of their own with a perfectly comfortable and impressively composed victory. It was bitterly cold so neither team were actually sweating, although there's no doubting which team had the far greater reserve.

So, that a fourth successive league defeat for Kerry brings them perilously close to relegation must be worrying enough, yet the nature of this performance will raises serious alarm for manager Eamonn Fitzmaurice: any hope that last week's decent performance against Kildare would be built on quickly disappeared, as Kerry faltered early, then stumbled on until the finish, scoring a mere five points from play, also losing Tomas O Se to a straight red card.

Unless Kerry take something out of their next two games, they'll go into the last round virtually resigned to division two. They'd travelled a long way for nothing, with lots to think about on the tiresome way home, because no matter how soon they get players like Colm Cooper and Paul Galvin back on board, it might not be enough to save their lives in division one.

Snow on the mountains surrounding Ballyfofey might suggest summer is still some ways off, yet that shouldn't deceive Kerry into thinking form will turn at the first sight of proper sunshine. Donegal certainly realise that, as several of their All-Ireland winners are coming straight back into form, none more impressively than Michael Murphy.

Murphy finished with 1-5, including a sweetly converted penalty after just six minutes, after Ross Wherity was illegally foot-blocked. Paddy McBrearty was showing good early form too, as Donegal went 1-3 to no score in front, after nine minutes, and even then Kerry looked done and dusted.

Indeed they went 18 minutes before Johnny Buckley opened their account, and trailing 1-5 to 0-3 at the break, there was no easy way back. Then O Se's red card came just four minutes into the second half, just when they needed him most: an off-the-ball incident, far away from the run of play, suggested O Se made some contact with Donegal midfielder Rory Kavanagh, and when the linesman brought this to the attention of match referee Derek Fahy, there was no hesitation in showing the straight red.

O Se will now miss next weekend's game against Down, and younger brother Marc mostly likely will too: he retired after 28 minutes after sustaining a hard knock on his right hip, and unable to run it off, suggests a seriousness that could keep him out of action in the short term.

Donegal started with 10 of the team that took down Kerry last summer, (Kerry started with 10 of theirs, too), after two late changes, Declan Walsh replacing Anthony Thompson, and Ryan McHugh his brother Mark. Unlike Kerry, they found an easy spread of scorers, Ryan Bradley adding one before the break, plus a free from Colm Mc Fadden, their more direct and urgent football in stark contrast to Kerry.

Only two of Kerry's forwards could score, 0-4 of their six points, with three of those coming from Johnny Buckley - including one free. Darran O'Sullivan popped up for the other, midway through the second half, and beyond that no one else even came close. Donnchadh Walsh, Jonathan Lyne, James O'Donoghue and Michael Geaney hardly ruffled the Donegal defence, O'Donoghue actually replaced by a defender, Fionn Fitzgerald, after O Se was red-carded.

Kieran Donaghy did make a few threatening catches in front of goal late on, and fouled during one of them, Kerry were rewarded a penalty, and with that the chance to put a little more respect on the score: substitute Kieran O'Leary stepped up eagerly, yet Paul Durkan got a hand to it, thus adding a little more misery to Kerry.