December Road: Dublin can’t find any heroes in the zeros 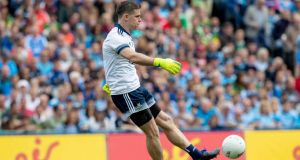 Dublin players have been claiming around 80 per cent of Stephen Cluxton’s kick-outs, a little down on last year. Photograph: Morgan Treacy/Inpho

An email from veteran reporter Noel Coogan in Navan draws attention to a pertinent statistical anomaly in Dublin’s roll of honour. Despite their 29 titles, the champions have yet to lift an All-Ireland for a year ending in zero.

Given all of the administrative mayhem that attended the early GAA championships, there are grey areas surrounding this.

The only such final Dublin reached was the 1920 All-Ireland, the much referenced championship of 100 years ago – the semi-finals of which were replicated at the beginning of the month with the difference that Mayo beat Tipperary after Dublin had defeated Cavan.

Tipp’s win over Dublin was the county’s last football All-Ireland but Dublin can argue that it didn’t take place until 1922 and therefore they haven’t lost a final in a year ending in zero.

Further there is the fact that when the county captured the 1898 title by beating Waterford – on the latter’s only trip to an All-Ireland football final – fixtures were running so far behind that the match was played on April 8th, 1900.

The closest Dublin came to doing it properly was in 1910 when, having been nominated by Leinster, they defeated Antrim in the All-Ireland semi-final on October 2nd to reach the final. A fortnight later they had to play the provincial final against Louth, who beat them and took their place in the All-Ireland.

Opponents Kerry withdrew in a row over railway ticket prices for supporters and Louth were declared champions.

Mayo are unaffected by such agonising as they defeated Louth in the 1950 All-Ireland, the first of back-to-back successes by that team, whose exploits their successors are still trying to emulate.

Freezing on the big occasion

Mayo were the first Connacht county to reach the All-Ireland final in 1916 – Galway had got to the 1900 ‘home final’ – and by coincidence it was until this weekend the latest All-Ireland in history, played on December 17th 104 years ago.

Dublin was in the grip of icy weather, which made conditions fairly hazardous. According to The Irish Times report of the final: “One could not negotiate a street without risking a broken limb.”

Mayo lost to the great four-in-a-row Wexford team of the era in a match thought likely to be called off in “the Arctic conditions” but the GAA persevered.

The stated reason according to the paper concerned matchday railway services, which were about to be cancelled for the duration of the first World War. “The reason given was stated to be that it was the last occasion on which excursion trains would be run for a similar purpose.”

Mayo have become a little weary, we suspect, talking about the 10 goals chances Tipperary created in the semi-final given that the competitive tension had drained from the contest for most of them. A more pressing concern from the match is likely to revolve around kick-outs.

So far this championship there hasn’t been major change. Productivity on Stephen Cluxton’s restarts is slightly down to closer to 80 per cent but on the flipside, Dublin have pinching more than a third of their opponents’ kick-outs.

It adds up to a serious challenge for the Connacht champions.

Dublin’s winning margin averaged over seven championship meetings with Mayo between 2012 and ’17 is a single point. Last year’s big victory skews the average but it still comes in at less than a score, 2.1.

“This is a little bit like the foot-and-mouth league – the Covid All-Ireland! No matter who wins it, it will be tainted because it’s different,” – Offaly manager and Mayo man John Maughan speaking to The Irish Times last July.