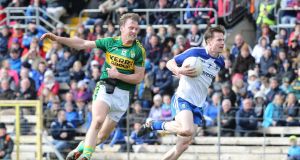 Kerry’s Donnchadh Walsh in action against Karl O’Connell of Monaghan during the Division One clash at Clones. Photograph: Andrew Paton/Inpho

Eamonn Fitzmaurice held a dry smile when asked what Kerry might want or get out of the last round of the Allianz Football League. The question was of course partly loaded: Cork are coming to Tralee next Sunday, and even though Kerry are already virtually assured of their place in the semi-finals, what Kerry team has ever wanted to lose to Cork?

More pertinent perhaps is the fact things couldn’t be more delicately balanced for Cork. If they beat Kerry (and Donegal lose), they too could reach the semi-finals. If they lose (and Mayo and Monaghan both win), they could find themselves relegated, with that fate likely to be decided on points difference.

Not that any Kerry team would want to contribute to Cork being relegated, would they?

“Of course with Cork coming to town it’s a game you want to win,” said Fitzmaurice. “Simple as that. And we’ll be going all out to win that. Anytime you play Cork it’s a big occasion, and the fact it’s the last round of the league as well means they have something up for grabs. It’s certainly a game we’ll want to win.

“The fact we are in the semi-final as well will mean three games in a row again, and that’s good for the players. There is competition for places there now, and it’s important to use the panel as much as possible.”

Only a 20-point defeat to Kerry, and a Donegal win away to Monaghan, will deny Kerry that semi-final berth now. Sunday’s win over Monaghan in Clones was satisfying on many levels then, not least the way Kerry wiped them out in the second half.

Not that Fitzmaurice was willing to talk about outright league victory just yet; nor does he think Kerry are putting any extra emphasis on the league this year, despite what their four successive victories might suggest, and the fact this is the first they’re heading for the semi-finals in his four seasons in charge.

“Well I think every year I’ve been here we’ve tried to look to make the semi-finals. My first year we didn’t expect to lose four in a row, and be scrapping against relegation.

“We were close last year. One more point and we would have made it, in Omagh, whereas one point less we would have been relegated, but yeah, thankfully we are there now.”

What is certain is that Kerry’s panel is looking at its strongest in years. Paul Geaney made his first appearance since last year’s All-Ireland final defeat to Dublin, while some fresh alterations, such as Paul Murphy playing at centre forward, continue to dress the team up nicely.

“Paul Geaney has been a breath of fresh air alright, and it’s been a challenge for himself as well, something new. Hopefully these things will add strength to the panel come championship.”

Kerry have plenty of players to come back too. Tommy Walsh didn’t feature on Sunday as he played a full county league game instead; Anthony Maher is also returning to match fitness after an injury lay-off; as of course is 2014 footballer of the year James O’Donoghue.

For Monaghan, meanwhile, relegation is now staring them in the face. They need to beat Donegal in Casteblaney this Sunday, and hope results elsewhere go their way, including what looks like a certain two points for Mayo against already relegated Down.

“Of course we know relegation is a distinct possibility, unless we improve our performance, big time,” said manager Malachy O’Rourke.

“We want to stay in this division, and that’s what we’ll be trying to do. From the start of the year we wanted to take very game on its own merits, like we did last year, and if we did that, things will take care of themselves. I’m just not sure if that will be the case, after next weekend.”