Cork likely to seize opportunity to make amends against Kildare 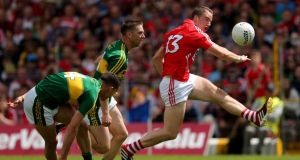 If Brian Cuthbert is still trying to figure out why his Cork team have found themselves in this precarious position then he’s not alone. They effectively had Kerry beaten that first day out in Killarney, and although running neck-and-neck for a good part of last Saturday’s Munster final replay, they suddenly found themselves cut hopelessly adrift in the drowning rain of Fitzgerald Stadium.

Now, exactly seven days later, they meet a Kildare team on the rising tide. Wins over Offaly and then Longford have left Jason Ryan’s team in a buoyant frame of mind, and while the 19-point defeat to Dublin might be gone but not forgotten, beating Longford by the same 19-point margin has certainly helped.

Cork have more than just that against them. Few teams – Dublin and Kerry being among the exceptions – have recovered from a provincial final defeat with this sort of swift turnaround. Then, even if they do get over Kildare, Dublin await them in the quarter-finals. And for yet further grim reading, no team beaten in their provincial final has ever come back through the qualifiers to win the All-Ireland title.

Yet there is good reason to believe Cork can at least get over this hurdle. Cuthbert didn’t disguise his disappointment at losing in Killarney last Saturday, and has named a team to reflect that – dropping forward Brian Hurley after what was probably one of the more disappointing performances of the evening.

Eoin Cadogan also returns from a hamstring injury, but is named at midfield alongside Alan O’Connor, with Jamie O’Sullivan holding onto the full-back berth, having done so well on Kieran Donaghy the last day.

Patrick Kelly misses out through injury, and is a loss. Colm O’Driscoll will start instead, alongside brothers Brian and Kevin. Still, Cuthbert will be asking for a lot more from Colm O’Neill (limited to 0-3 against Kerry) and also Donncha O’Connor.

The most glaring area of improvement for Cork is consistency, having gone the last 26 minutes of last Saturday’s game without a score. O’Connor struggled to revisit his heights of the drawn game, and if Cork can get more possession around midfield it’s likely they will present Kildare with a far more formidable challenge than either Offaly or Longford did.

“Physically, the players are extremely fit,” says Cuthbert, “and I’d expect them to have recovered in a couple of days. So it’s a mental challenge now, really, because a result like that Kerry game does take a lot out of them.”

Ian Maguire is also back amongst the Cork subs, and he may well provide the fresh injection of pace. That’s because Kildare will definitely come at them with considerable tempo, hoping to capitalise on Cork’s heavy schedule.

Kildare had 12 different players on the scoresheet by the end of the Longford game, including the lively corner forward Niall Kelly, while debutant Mark Sherry also made an impact off the bench.

Their defence looks a lot tidier too, particularly full back Mick O’Grady, and with Eamonn O’Callaghan’s eagle eye for goal, Cork will need to stay tidy in defence too.

It’s never easy to know how teams will react to the sort of defeat Cork experienced last Saturday. Yet the feeling is they have more to give – if not certainly more class – than Kildare, to at least get them back to the quarter-final stage where they should have been in the first instance.