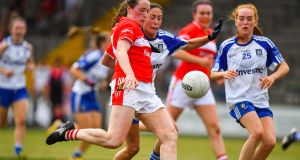 Aine O’Sullivan of Cork in action against Rachel McKenna and Gráinne McNally of Monaghan during the TG4 All-Ireland Senior Championship Group 2 Round 2 match at St Brendan’s Park in Birr. Photograph: Brendan Moran/Sportsfile

Cork made a massive statement as they scored seven goals to book their place in the quarter-finals of the TG4 Ladies’ All-Ireland Senior Football Championship with a 7-7 to 1-9 win over Monaghan in Birr.

It was a day when all four provincial champions progressed to the knockout stages of the competition where they join Kerry, Westmeath and Mayo.

But Ephie Fitzgerald’s side did it with ease, after they only held a 2-4 to 0-6 lead at half-time at St Brendan’s Park.

Maire O’Callaghan and Aine O’Sullivan were on target for the 11-time champions in the first half. And Ciara O’Sullivan scored two goals on the resumption, while Saoirse Noonan did likewise.

Doireann O’Sullivan completed the job with Linda Martin scoring the consolation for Monaghan in Group 2.

Seven of the eight quarter-final spots have already been decided now and reigning All-Ireland champions Dublin marched on with a comfortable 5-17 to 2-13 win over Cavan at Dunleer.

This was Dublin’s first taste of Group 4 in the round robin, after they backed up National Football League success with a thumping victory over Westmeath in the Leinster final.

Noelle Healy was the star, scoring 2-5 and Dublin capitalised on a huge 4-8 to 1-7 interval lead here. Laura McGinley struck the other two goals for Mick Bohan’s side. Aishling Sheridan and Catherine Dolan found the net for Cavan who face potential relegation now.

Galway were another provincial champion who laid down a marker, and they secured a quarter-final spot with a big 3-12 to 0-5 defeat of Waterford at Birr.

Galway only had two points to spare against Mayo in the Connacht final but they were far too good for their Munster rivals.

Tracey Leonard scored five points and Galway were already 3-6 to 0-4 clear at half-time. Leanne Coen, Róisín Leonard and Ailbhe Davoren were the goal-scorers.

Waterford have now lost both of their games and could be relegated, while Galway and Westmeath will battle it out for top spot in Group 3 next weekend.

Geraldine McLaughin was once again the hero for Donegal as the Ulster champions made a winning start to Group 1 in a 0-17 to 0-14 victory over Tipperary at O’Rourke Park in Castlerea.

Aishling Moloney starred for Tipperary but despite her nine-point haul they fell to their second defeat of the campaign.

Donegal are already through to the last eight but Tipperary join Cavan and Waterford in the relegation battle.