Cork call on calm heads to book meeting with Dublin 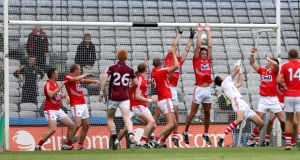 Ten Corkmen fail to keep Michael Meehan’s late free out of the net but it wasn’t enought for Galway. Photograph: Donall Farmer/Inpho 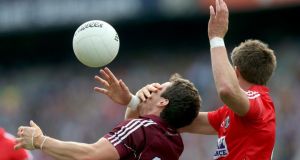 Cork 1-17 Galway 1-16: Saved by experience here, Cork will not be able to tap into that advantage when facing Dublin in a repeat of the 2010 All-Ireland semi-final at next weekend’s quarter-final juncture.

Kerry (or Cavan) await the winner.

The Rebels manager Conor Counihan pointed to “six or seven” goal scoring chances that went abegging but really they looked finished until the last few rolls of the dice.

Salvation came because of the refusal of Pearse O’Neill, Aidan Walsh and Ciarán Sheehan to bow down and lose.

With time ebbing away, the end seemed nigh for Counihan’s time over Cork. Failure to get close to the All-Ireland winning high watermark of 2010 for a third season running, and going backwards as a footballing entity, Galway had them by the throat. But they let them climb back to their knees. From there, the aforementioned trio muscled their way into enough scoring positions to haul in Galway’s three point lead and progress into next weekend’s All-Ireland quarter-finals.

The arrival of men like Paddy Kelly, Paudie Kissane and Paul Kerrigan also helped starve Galway of the breaking ball that had the westerners coasting to victory.

The tide didn’t turn until the 66th minute, when O’Neill reacted quickest to his own shot against the butt of the post to give an alley-oop for Walsh to slap into an empty net.

That levelled matters at 1-13 to 0-16. Galway crumbled thereafter, with Sheehan winning the next kick-out and finding O’Neill in acres of space. His point gave Cork the lead for the first time since the 19th minute.

Suddenly it was raining points into Hill 16. But Galway had one dying kick in them.

Stunning breaking news was revealed before the throw-in: Cork footballers played as selected. You had to see it to believe it but there they were, a Counihan side named one to 15 in their actual positions.

Their cause was helped by Cork’s tactics, allowing them stream out of defence before a red swarm on the 45. That allowed Paul Conroy, Seán Armstrong and Meehan find the target with speculative shots.

It would have been worse if Danny Cummins hadn’t pulled up lame. The sprightly corner forward had big Michael Shields in some bother but the former Aussie Rules convert was happily striding out of defence once Cummins limped off.

No big defender wants to be minding a small, snappy forward.

Maybe it is the work of referee chief Seamus McEnaney behind the scenes coming to fruition, but a number of pointed frees came from David Gough’s heads up refereeing. Gough stamped out the jersey clinging in the opening 35 minutes by penalising defenders for holding their men before the ball went in.

It was fussy refereeing but attackers at both ends profited.

Cork did always look capable of tearing the maroon defence asunder, but Manus Breathnach was not going to be beaten. He denied Pearse O’Neill in the first half and Mark Collins early in the second. Both were saved from point blank range.

With the exception of Sheehan, and Daniel Goulding frees, so many marquee Rebels were anonymous. Counihan introduced Kissane and Kerrigan to kickstart the revival.

Eventually Walsh went on a gallop through the middle and gave Brian Hurley a sight of goal. Breathnach, brilliantly, denied him any space to breath, never mind get a shot on goal.

Next, Counihan sent Donnacha O’Connor, his All-Ireland winner in 2010, in for Hurley.

Cork had 18 minutes to save their season.

Galway needed to keep going. Gary Sice understood this, sprinting out of defence to land a sumptuous point that kept a goal between them.

Alan Mulholland’s tactical calls from the line were also smart. He kept four players in attack, forcing Cork to mind the house despite the need to force the issue.

Any GAA person worth their salt will tell you the day Armstrong and Meehan click in the Galway attack, any victory is possible. They shared 1-10 this evening, but after Walsh’s goal, points from O’Neill, Goulding, Sheehan and Shields down the home straight edged Cork four clear.

In the game’s last play Galway won a 20 metre free and despite Meehan rocketing to the net, time had run out.

Cork survived. But that’s all they did.