December Road: Will there be a Christmas card list on Saturday? 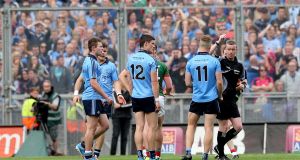 In the nine years since Dublin and Mayo have established the defining modern All-Ireland rivalry, the eight matches have been closely contested with the exception of last year’s semi-final, which the champions won by 10.

As a margin, it was an outlier with two of the other seven ending in a draw (2015 semi-final and ’16 final) and just one (2015 replay) exceeding the margin of one score – Dublin winning by seven.

That other great arbiter of tension, the number of cards handed out tilts more towards Dublin, who picked up 29 of the 49 yellow cards handed out by referees over the course of the eight matches.

The advent of the black card, introduced in 2014, has made itself felt in matches but not necessarily on the scoreboard where Dublin have come out on top in the four of the five matches during which they lost players to the rule – which has changed this year to 10 minutes in the sin bin rather than enforced replacement for the rest of the match.

Only when James McCarthy was taken off because of a black card in the drawn 2016 final did Dublin fail to win – which although they have the far stronger record, they did on three occasions, losing in 2012 and drawing in 2015 and ’16.

Red cards haven’t been very significant. Donal Vaughan and John Small were sent off together in the 2017 final whereas both Cillian O’Connor (last year) and Diarmuid Connolly were red-carded in injury time at the end, although Connolly’s proved controversial when he escaped suspension courtesy of the DRA after the drawn 2015 semi-final.

In his accounts of what motivated him to initiate the public investment in Dublin GAA, former taoiseach Bertie Ahern referenced a trip through the city’s south side 25 years ago.

“I remember back in ’95, coming back up from a commemoration in Wexford the day of the All-Ireland final, and I had to go to Liberty Hall before I saw the first Dublin colours. It’s not like that now, but it was like that.”

Seeing the blue of the oul’ Dubs festooned on the Siptu headquarters may have been reassuring for the then Fianna Fáil leader, who had enjoyed decent relations with the unions as minister for labour in the late 1980s.

What must he have made of the recent picture from Chicago where the local unions registered their All-Ireland support in unambiguous fashion and Tweeted:

“In honor of the fine gentlemen from the County Mayo playing in the All Ireland Game this weekend, we offer this token of appreciation from Chicago’s Unions and the Windy City.”

In All-Ireland football week, hurling continues to command attention with a documentary on the game’s foremost legend ‘Christy Ring: Man and Ball’, which airs on Thursday (10.15pm on RTÉ One).

The Wizard of Cloyne wasn’t entirely a stranger to the big ball and lined out for Glen Rovers’ football adjunct, St Nick’s, with whom he won a county title in 1954 – the achievement all but ignored, as that was the year that he also won a then record eighth All-Ireland hurling medal.

According to biographer Tim Horgan, Ring preferred using his powerful wrists to hand-pass and fist points to kicking the ball. He was even approached by the Cork selectors.

“Ye must be really desperate to ask me to play football for the county,” he told them.

Prior to 2013, the only previous All-Ireland final between Dublin and Mayo was the 1921 championship, not completed until June 1923. It used to be believed that this match was the first in which the solo run was used.

Seán Lavan (1898-1973) from Kiltimagh was the player in question and his innovation in passing the ball from toe to hand while running is now generally recognised.

In ‘A History of Gaelic Football’ by the late Jack Mahon, it is stated: “People may disagree about the occasion on which Seán introduced the solo run but there is no disputing that Sean Lavan introduced what is now so much part and parcel of the game.”

Lavan, an exceptional athlete, represented Ireland in both the Paris and Amsterdam Olympics in 1924 and ’28 when he captained the Ireland team.

The number of finals between Leinster and Connacht counties. Sam Maguire has gone west seven times after these contests, most recently in 2001 when Galway beat Meath. Mayo can reflect that their fabled back-to-back titles in 1950 and ’51 were both won against opposition from the East, Louth and Meath.

“I don’t watch the Sunday Game, lads. Genuinely don’t watch it. I was travelling down through the fog so I didn’t. I’ve heard the reaction and seen the reaction. I know Pat Gilroy quite well through work. It brought a smile to my face anyway,” – Mayo manager James Horan stays out of the debate on Dublin’s recent dominance in football.