By the numbers: Playing it again for Sam 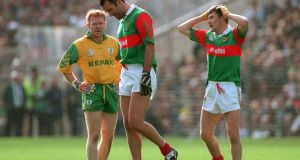 A despondent Liam McHale leaves the pitch after being sent off in the 1996 All-Ireland final replay. Photograph: Billy Stickland/Inpho

The 2000 final replay was the first to be played on a Saturday. Although the tradition is well established now so as to minimise the effect on club attendances, the reason 16 years ago was the International Rules first Test between Ireland and Australia that was set for Croke Park on Sunday, October 8th. No Kerry or Galway players played in the first Test, incidentally, but Séamus Moynihan, Pádraic Joyce and Seán Óg de Paor were all back for the second game.

Paddy Mythen of Wexford is the only man to referee two All-Ireland final replays – in 1943 between Roscommon and Cavan and again three years later when Kerry beat Roscommon.

Pat McEnaney is the only man to preside over two All-Ireland final draws – in 1996 between Mayo and Meath and in 2000 between Kerry and Galway. He famously oversaw the replay in 1996. Brian White took over for the second game in 2000.

This will be a second replay appearance for both Dublin and Mayo. Dublin appeared in the first ever final replay in 1894 – although it was actually played in April 1895. It was abandoned in controversial circumstances after the Dublin team walked off the pitch in Thurles, complaining of being attacked by Cork supporters.

Cork were two points up at the time and subsequently refused to play in a refixed game so Dublin were awarded the title. As readers may be aware, there was also some controversy involved in Mayo’s only replay appearance in 1996 against Meath.

The Kerry team for the 1938 replay against Galway featured four men named Bill in its defence. Bill Kinnerk and Bill Myers were the corner-backs, Bill Dillon and Bill Casey played in the half-back line.

Kerry have won five All-Ireland titles after replays. Meath have won two. No other county has won more than one. Cork are the only county to have appeared in more than one final replay without being champions at the end of either of them.

This is the sixth time in a row that an All-Ireland final replay has fallen in an Olympic year. In 1988, the GAA held back the Meath v Cork replay by a week so as not to have to fight with the Seoul games for coverage. Meath midfielder and sports journalist Liam Hayes had to request not to be sent to cover the Games for the Sunday Press.

The team that scored the final equaliser in the drawn game has gone on to be crowned champions on eight occasions. The past four equalisers have been scored by Pádraic Joyce (inset left, free), Colm Coyle (bounced point), Brian Stafford (free) and Mick O’Dwyer (handpass).

This will be the 13th time an All-Ireland football final has gone to a replay. There have been eight All-Ireland hurling final replays, including three in a row between 2012 and 2014. The only back-to-back football replays came in 1937 and 1938.

Jack Murphy of Cahersiveen was only 22 when he was man of the match in the 1926 drawn All-Ireland final.

The Kerry centre-half back contracted pneumonia in the aftermath of the game – it went into lore that he put his clothes on over his soaking wet playing gear – and was too ill to play in the replay. He died and was buried 10 days after the replay. The South Kerry championship is played for the Jack Murphy Cup.

There have been 23 players who have appeared in two All-Ireland final replays. Eleven from Kerry, 10 from Roscommon and two from Meath – Colm Coyle and Martin O’Connell.

In the 1996 final, Pat McEnaney played just 39 seconds of stoppage time in the drawn game between Mayo and Meath, prompting the high-water mark of cynicism over the GAA’s fondness for replays.

While there was much talk of time-keeping being taken out of referees’ hands in the aftermath, that has yet to happen.

Though as we saw with Conor Lane blowing his final whistle on the dot of 79 minutes this time around, referees are allowing games to be played with the correct amount of added time these days.