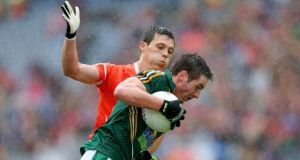 David Bray of Meath with struggles to find a way past James Morgan of Armagh at Croke Park. Photograph: Donall Farmer/Inpho

Meath, a football dynasty deep in transition, have been removed from the championship before the serious business commences as Armagh’s silent resurrection under Paul Grimley gains pace.

“People need to remember that probably half the team is playing either their first or second championship season with Meath,” said manager Mick O’Dowd after year two of what he believes needs to be a “five year programme, really, to get these lads to where they need to be”.

“We had a solid league and blooded a lot of players and used a lot of players during the championship as well. That’s something we would be encouraged by but it is disappointing. Games like today without Kevin (Reilly) and Conor Gillespie and Eamon Wallace, we didn’t make an issue of it, but ultimately at this level you need all your players.”

They say it’s Dublin’s All-Ireland to merely collect in September but there are a host of uncompromising Ulster bandits lying in wait between now and then. One of them could yet be Armagh who face Donegal next Saturday night. And they are beginning to look like Armagh again; the Armagh we knew when Grimley was assistant coach to Joe Kernan and Kieran McGeeney marshalled everything from centre back.

McGeeney has been perched on Grimley’s shoulder all summer. He’ll always be their leader. Not that this side can be compared to the early 2000s team. They are not in that league but they are contenders again.

And still they refuse to talk to the media (Stefan Campbell did a brief man of the match interview with Sky).

At least Mick O’Dowd spoke afterwards about the need for patience from the Meath public and former players who are paid to give their opinions.

“They are a brilliant bunch of players. They’ve given enormous dedication to the Meath jersey. As most inter-county teams do.

“I hear criticism sometimes from past players but they didn’t have to dedicate themselves to the jersey like the modern inter-county player does, but in general most Meath people realise there is a period of development going on. We just need to stand tall, stand by one another and work hard for the county. At the end of the day that’s what we are all doing.

“They know they are young, amateur footballers who are giving their lives to the Meath jersey. As amateurs. That’s a very important thing to state.

“So anyone that uses – and I’m not talking about you professional journalists, I’m talking about people, you know, so called experts – they’d really want to think about what they say about players.

“That’s really only a minority,” O’Dowd did add. “There are some fantastic players that have worn the jersey that have stood by us, spoke to individual players, spoke to me and more or less said we’ve all been there before.”

Communication remains a problem. Both counties neglected to announce that captains Kevin Reilly (hip flexor) and Ciarán McKeever were unfit to play. At least in Shane O’Rourke and Aaron Kernan they both had replacements of experience and quality to fill massive boots.

Meath were initially the sharper outfit in all aspects, except the finishing touch of their forwards. The lack of nous in their approach continually made Charlie Vernon and Brendan Donaghy look like the McGeeney and Francie Bellew spine reborn.

And then, trailing 0-8 to 0-2 having not scored since Mickey Newman’s free in the seventh minute, they were jolted to life by the fear of extinction from the 2014 championship. Aidan Forker had helped himself to 0-3, but when Campbell pointed a switch flicked in the Meath consciousness. Call it survival mode.

Scores rained down from Damien Carroll, Graham Reilly – in for Brian Meade – David Bray and Newman to leave the minimum between the teams at the turn.

Reilly levelled it up seconds after the break with a glorious strike but Aaron Kernan responded, sauntering up from wing back for a trademark score. The brother, Tony Kernan, put them two ahead before David Bray pulled it back again with another impressive effort in the conditions.

Then Paddy O’Rourke – a cousin of Shane – unleashed a 53-metre free that made it 0-10 each entering the last quarter.

O’Rourke missed a 45, partially due to close range heckling by Aaron Findon, which meant Kernan eased Armagh ahead with his second point.

The game had completely opened up now; Mark Shields copied Kernan to race up field and grab a point. Armagh by two. Kevin Dyas and Jamie Clarke – shadowed throughout by the excellent Donal Keogan – started showing for more ball.

Newman had the next chance but instead he registered Meath’s seventh wide. Campbell then Dyas stretched Armagh’s lead to four as both Bray brothers were hauled off before the hour mark.

That was the difference; all Armagh’s forwards scored from play. It was a comprehensive victory in the end as Brian Mallon arrived to contribute two pretty scores.

So Meath pass into the shadows.

“We’ll be back again for sure.”

No one doubts O’Dowd.