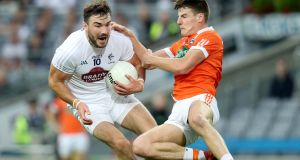 Kildare’s Fergal Conway is challenged by Armagh’s Niall Grimley during the All-Ireland Round 4B qualifier at Croke Park. Photograph: Oisín Keniry/Inpho

Saturday nights never carried this sort of fever. Armagh, the 2-1 outsiders going in, came out at the end of a barnburner, putting Kildare away by a scrappy goal that was the only thing to separate the sides. They’re back in an All-Ireland quarter-final for the first time since 2014 and will play either Dublin or Tyrone next Saturday.

This was always going to be a landmark game in the life of both sides, the difference between a promising season and a good one. Both teams are clearly on the up and the quality of some of the score-taking here screamed potential. But the win is the thing. Armagh go home with it, Kildare don’t. That determines the taste of the winter in both counties now.

Kildare’s job coming in was to brush off the Leinster final defeat and act like it didn’t hurt. But for long stretches, they were a pale imitation of the team that scored 1-17 against Dublin. Daniel Flynn was nothing like the force of nature he had been a fortnight ago, Kevin Feely was struggling to break even with Armagh newcomer Stephen Sheridan in midfield.

Though they cleaned it up the further the game went on, their shooting was far less efficient than Armagh’s early on, missing nine scoring chances in the first half alone compared to Armagh’s four.

Kieran McGeeney’s side broke with type and packed their defence while the game was settling down. They haven’t been a blanket-defence team this year but, perhaps mindful of Galway’s success in the Division Two league final with the tactic, they brought 13 men back at times and aimed to hit Kildare on the break.

And for most of the first half at least, it worked splendidly. Their greatest strength lies in the accuracy of the forwards and five of the six who started had at least a point from play to their name by the break. Gavin McParland scored a couple of classy efforts, Rory Grugan and Andrew Murnin dropped a bomb each as well.

For all that, The point of the day came from Aidan Forker, the wing back who was constantly on the front foot. On 17 minutes, he sliced a gorgeous effort over the black spot with the outside of his boot. It put Armagh 0-6 to 0-3 ahead and deserving of every last inch of it.

But the to-and-fro in this one wasn’t confined to the breathless second half. Kildare came back with fine points from Niall Kelly, Paddy Brophy and Ben McCormack. With five minutes to go until the break, the teams sat level on 0-7 apiece.

And then, the difference maker. Forker, a constant threat up the left flank of the Armagh attack, fed Murnin after an advantage had been played and though the Armagh full forward made room for a shot, Mick O’Grady got across to get a decent block on it. Unluckily for Kildare, the block took it away from goalkeeper Mark Donnellan and the ball squirted towards the goal-line. It was going in anyway but Murnin got there to make sure. Armagh went in 1-8 to 0-8 ahead at half-time as a result.

But Kildare had plenty to say about it yet. Even after Jamie Clarke kicked the first point of the second half – a harbinger of a stellar 35 minutes from the brilliant Armagh inside forward – Kildare kept at it. Brophy, Keith Cribbin and Daniel Flynn all kicked towering scores. Fergal Conway lamped over back-to-back points to push them ahead by 0-15 to 1-11 after 54 minutes. They looked for all the world like they were finally finding their rhythm.

Armagh are clearly made of the stern stuff of their manager, all the same. McParland hit back after turning onto his left 35 metres out, Clarke nipped over a sensational score after good work by Ciarán O’Hanlon.

Kildare were stuttering now. Keith Cribbin went off on a black card after 59 minutes and Rory Grugan pushed Armagh two ahead. Brendan Donaghy made it three after more brilliant work by Clarke. Three points so late in a game like this looked like an impregnable lead.

And so it proved.