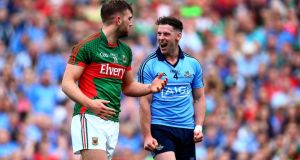 Mayo’s Aidan O’Shea has confirmed that he was headbutted during Sunday’s All-Ireland semi-final draw with Dublin - after television cameras caught the off-the-ball incident between himself and Philly McMahon.

In the 42nd minute, with Dublin leading 1-8 to 0-9, one of several scuffles broke out between the O’Shea brothers (Aidan and Seamus), Colm Boyle and Dublin defenders James McCarthy and McMahon.

In the melee McMahon headbutted Aidan O’Shea. The 25 year old turned to see if referee Joe McQuillan or either linesman spotted the incident.

“Yeah, I was headbutted alright but that’s not for me to enforce the rules of the game,” said O’Shea. “There were plenty more things out there the ref missed too.”

Did it get nasty Aidan? “Ah no, look: it was a fairly competitive game out there. Some good one on one combat. The referee, Joe, I thought he had a fairly good game for the most part. You are not going to get everything right.”

There is also expected to be a hearing for Diarmuid Connolly, following a red card for striking after an altercation with Lee Keegan in the 75th minute. Connolly was previously sent off in the 2011 semi-final victory over Donegal but was subsequently cleared to play in the final against Kerry.

“I won’t rule it out,” said Vaughan. “I know Henry Shefflin got back fairly quickly before. I know he didn’t last too long when he did get back. We have a fantastic medical team. I will give myself every chance.”

Rory O’Carroll left the field for blood attention in the fourth minute and did not return. It was unconfirmed whether this was due to concussion but he needed 10 stitches.