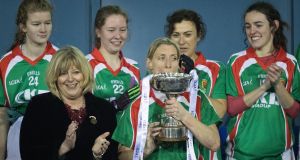 Carnacon’s Cora Staunton and team-mates after their win over Mourneabbey in the All-Ireland Ladies SFC final at Parnell Park. Photograph: Oisín Keniry/Inpho

All-Ireland champions Carnacon are appealing their removal from the Mayo club championship.

The decision was taken on Tuesday following delegates and officers voting 29 to four that Carnacon had brought the game into disrepute, subsequently voting 26-2 to remove them from senior league and championship involvement in 2018.

The sanction was imposed under law 288: “Any member of the Association found guilty of conduct calculated to bring the Association into disrepute shall be liable to expulsion or suspension by the committee, board or council concerned.”

However, Jack Anderson, professor and director of sports law at Melbourne University, tweeted: “Surely, they’ll win on appeal – do rules on championship eligibility mandate that a club must supply not withdraw county players? Isn’t agreeing to play with a county a voluntary act?”

Mayo club representatives overwhelmingly disagree with Carnacon’s decision to inform Mayo manager Peter Leahy in July that their members would be leaving the panel.

“Our girls had genuine concerns and genuine issues that they felt were being overlooked and that’s why we got involved as a club,” said Carnacon secretary Beatrice Casey ahead of their appeal to the Connacht council.

Mediation talks between all parties failed to reach an agreement but a confidentiality agreement has blocked anyone from revealing the origin of the dispute between Leahy’s management and 12 players who walked off the squad.

Cora Staunton, who rejoined the Mayo panel after a winter playing Australian Rules in Sydney, and seven other Carnacon players are not alone. Mayo captain Sarah Tierney and three others also left the squad but the county board has not brought any sanctions against these individuals.

“Understandably, the entire panel, management, club officers, our families and supporters are devastated by the sequence of events which have transpired,” Casey added.

“The club is in the process of preparing an appeal of this decision . . . all our members want is to play football and we hope to get this opportunity again in the not too distant future.”