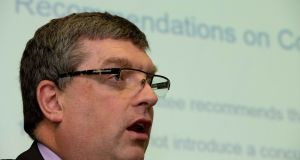 Chairman of the GAA’s medical, scientific and welfare committee: We have somebody attending that Berlin conference on behalf of the GAA.” Photograph: Inpho

The GAA will continue to resist any changes to its “if in doubt, take them out” policy on concussion. Revised protocols on concussion are being considered for issue early in the New Year and there may be changes to the guidelines on recovery.

Unlike in rugby, however, the GAA won’t be exploring any of the controversial pitch side assessment methods, and any player with a suspected concussion must be removed for the remainder of the game.

“That is absolutely essential,” says Ger Ryan, chairman of the GAA’s medical, scientific and welfare committee, and now charged with issuing those updated guidelines on concussion. “We’re certainly very clear on the principle ‘if in doubt, take them out’, that it is absolutely valid, and I don’t see that changing.”

Central to any revisions will be discussions that came out of Ireland’s first concussion symposium staged in Croke Park earlier this month, and also the fifth International Consensus Conference on Concussion in Sport, to be held in Berlin on October 27-28th.

The last international consensus conference was in Zurich in 2012, and formed the basis of the GAA’s current 12-page concussion guideline document of November 2013. Ryan sees some room for revision in those guidelines.

“The key message was that if there is any suspicion of concussion then that player must be removed from play, and that player should not resume play. That is the GAA guideline that is in place. There is ongoing discussion about the blood-sub, and so on, but irrespective of the sideline assessment, as in rugby, and we’re absolutely satisfied with that, and there was nothing in the symposium to suggest anything else.

“The most significant element after that was how you treat concussion, how you manage it. Certainly there is research emerging that would suggest that’s an area open to further discussion, as to what is the most appropriate approach. Certainly what we heard in the symposium is that certain activities can be undertaken during the recovery process, and may actually speed up that recovery process. Some general exercise and activity . . . rather than total rest, physically and mentally.

“The other fundamental point is that recovery from concussion is entirely possible, and we want to see a situation where concerns about concussion wouldn’t prevent anybody from letting their children play sport. We also advocate that there is medical clearance to come back to play, and that remains the case.”

Ryan also pointed to the Berlin Conference next week as having an important bearing on any revisions: “We have somebody attending that Berlin conference on behalf of the GAA, and we will be looking to see what statements emerge from that. Again there is ongoing research, and evidence, and there no definitive approach to the matter right now. Our challenge is to keep in touch with that, and adjust our protocols accordingly, and on top of that make sure we have a proper education programme around it for our players, mentors, managers, and medical personnel.

“So there is potential for this to be updated, absolutely, depending what comes out of Berlin.”

The Croke Park symposium was unanimous in agreement any player with a suspected concussion must be removed from the game: Dr Barry O’Driscoll, formerly of the IRFU medical, told the symposium that rugby continued to be “stabbing in the dark” with its pitch side assessment.

“That’s a separate issue, really, how you assess the suspicion,” says Ryan. “The key point for us is once there is a suspicion, that player is removed from play. I can’t give you the exact percentage, but about 95 per cent of GAA games may not have a doctor present, so we have to have protocols and guidelines that work at all our games.

The GAA will also likely resist any changes to its existing rule of not allowing a blood-sub type rule for players with suspected concussion.