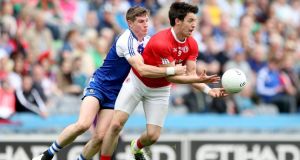 Tyrone manager Mickey Harte has been calling for some credit due – his team have amassed an average score of 0-17 per game in reaching the All-Ireland semi-final.

It is hard to blame spectators for overlooking those scores though, especially when it’s all unfolding so quickly. In their quarter-final against Monaghan Tyrone’s attacks which ended in scores lasted an average of just 20 seconds.

Tyrone’s game is a counter-attacking one, with a clear focus on transitioning from defensive zones to attack as efficiently as possible.

Against Monaghan they scored on 18 occasions (0-10 from play), seven of those instances were the result of a turnover of sorts.

Their average scoring movement consisted of just three handpasses and a kickpass. Yet only seven of their 51 kickpasses during those 18 scoring movements were in general play. The rest were either kickouts, frees or sideline kicks. 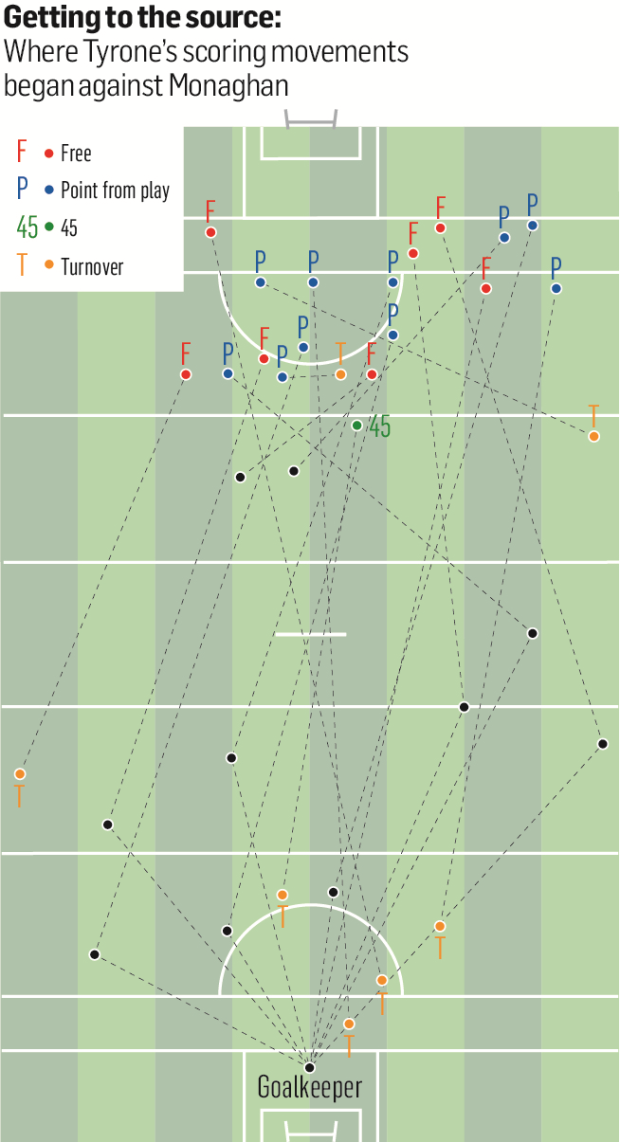 So in respect of all that Tyrone are often moving from their own full-back line, or a kick-out situation, to converting a score, all within 20 seconds (some scoring movements were as short as six and eight seconds)and with just three or four phases involved.

So that’s where Peter Harte and Mattie Donnelly in particular have shone with their ability to carry the ball at pace and break the tackle.

Unlike a number of their fellow Ulster sides who set up with similar numbers in defence, Tyrone’s eventual attack is far more direct albeit still handpass dominant.

Very little in the way of side-to-side handpassing on the opposition 45 so far from them. From number nine back the way Tyrone players have scored 2-23, before that they had 2-17 in the league and McKenna Cup.

They’re coming from deep, wide positions with lots of strong angled running, with all of their scores from play against Monaghan being converted inside of 35 metres. Of their high-scoring total so far in their six championship games, 33 per cent have arrived via placed balls as teams struggle to deal with their running game. The key cogs Harte and Donnelly have 2-5 and 0-10 respectively this summer.

While the latter has been among the best footballers so far in Championship 2015, thriving in a midfield role which allows him more space, he will no doubt struggle against an aerially dominant Kerry midfield containing an equally in form David Moran.

Kerry won 60 per cent of the kickouts against Kildare, an overwhelming amount of them coming cleanly particularly in the second period.

Niall Morgan though has proven a savvy operator behind the Tyrone kickout, finding a team-mate with 71 per cent of his restarts versus Monaghan.

In fact 50 per cent of Tyrone’s scores originated from Morgan’s kickouts as he tends to go short and wide, setting their running game in motion.

Comparing Kerry’s four games this summer with Tyrone’s last four and the Kingdom have fouled more (69 to 67), they have received more yellow cards (12 to 11), but Tyrone have three black cards to Kerry’s two as well as being dished the sole red card.