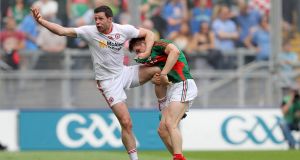 Tipperary carry the greatest goal threat of any football team in the 2016 championship. On Sunday they play a Mayo team who have conceded 53 goals in their 44 league and championship games against Division One opposition over the past four years.

And they will see goals as their pass to doing exactly that.

The concession of goals has been one of this Mayo team’s downfalls in recent years but after a stuttering league campaign this year, under new manager Stephen Rochford a new defensive template has begun to yield improved results.

Yet with Kevin McLoughlin constantly improving in his role as a sweeper, Brendan Harrison and Kevin Keane in good form and in particular Lee Keegan excelling in his man marking duties – they have conceded just three goals in six games so far this summer.

Their overall goal concession per game for league and championship in 2016 is also below one.

They hit 12 goals during this year’s league campaign, only Derry scored more. The Ulster side though averaged just one goal per game in the championship, before their exit in the qualifiers (against Tipp).

Tipperary though have also scored the most championship goals so far - 10 of them - and other than Kerry, who have seven goals in three games (but just eight in nine league games), they have the greatest goals per game Championship average. An average of two goals per game in their five contests to date. 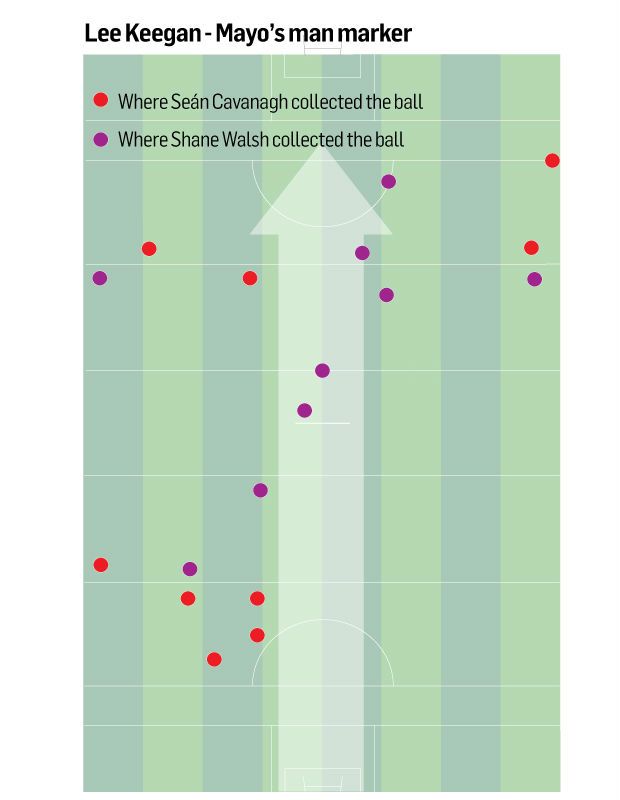 Nonetheless, whatever Tipperary attacker is approached by Lee Keegan ahead of the throw-in this weekend – they’ll know that they are in for an uncomfortable 70-plus minutes.

This year he has played five championship games, and conceded just one point from play, that one a speculative effort from the right wing by Galway’s multi-talented Shane Walsh. With Keegan on his toe.

The Mayo number five is not only a physical, explosive and intelligent man marker, but he’s equally capable in attack - without ever sacrificing his defensive duties.

In Mayo’s two biggest games so far this year – against Galway and Tyrone – Keegan has kept both the Tribesmen’s elusive centre forward, and Tyrone’s captain and talisman Seán Cavanagh to just nine touches apiece.

And while he has conceded just the one point in five games (marking London captain Mark Gottsche, Galway’s Walsh, Fermanagh’s Ryan Jones. Kildare’s Fergal Conway, Westmeath’s Paul Sharry and Tyrone’s Seán Cavanagh), he has managed to score five points himself. Not once being outscored by the forward he’s been tasked with picking up.

Against Galway not only did he limit his opponent to scurrying on the peripheries, but before Walsh was substituted in the 66th minute Keegan had touched the ball on 22 occasions. That is over double the amount the man he was deployed to mark did.

It was against Tyrone in the All-Ireland quarter-final victory however that the three-time All Star showed exactly why he is the best all-round defender in the game.

In comparison to Cavanagh’s nine touches, Keegan was involved in the play on 30 occasions before the Tyrone number 14 was dismissed on a second yellow card. The frustration of not being given an inch all afternoon finally boiling over.

Keegan was touch tight in his own half, often too tight for Cavanagh’s liking. While when the Tyrone man dropped deep for possession, or to try and tackle his way into the game, Keegan was constantly screening him. Cutting him off as an out ball and with enough space allotted to allow for a sudden overlapping run beyond him.

This weekend you can be sure that Mayo will again set up with McLoughlin in front of the full back line where his role will be key against a team who carry such a long ball threat.

Inside for Tipperary Conor Sweeney and Michael Quinlivan have managed 46 per cent of their team’s championship total from play – 5-19. Sweeney is likely to line out at full forward where Kevin Keane will pick him up, but who picks up Quinlivan will be interesting.

Keegan has dropped back in to the corner before, and dealt with taller men on plenty of occassions (Cavanagh, Diarmuid Connolly). And the joint sixth top scorer so far in the 2016 championship will certainly need special attention. All the same, Tipp will no doubt be confident of exploiting height mismatches in the Mayo defence as they did against Galway.

If the Westport man remains at centre back though he’ll pick up Kevin O’Halloran, Tipperary’s second top scorer this summer. And while he is best known for his free-taking, he has already scored 1-5 from play in reaching the semi-final stage. Rochford’s decision, who will he put Keegan on, will be decisive. As it was in the quarter-final, when the decision to match him up on the Tyrone veteran raised a few eyebrows. But ultimately proved the winning of the game.

The All-Ireland champions of 2012, 2013 and 2014 averaged 1-15 against Division One opposition over their respective league and championship campaigns. Mayo can boast the exact same scoring averages in those years.

So certainly if they can continue their defensive improvements, they may go a step, or two further than in the last two seasons. But key to that will be the deployment of their very talented man marker.

1 Flanagan and O’Donovan named in Limerick side to face Galway
2 Keith Duggan: Through the glories and the disgraces, we were all Maradona addicts
3 GAA Statistics: Can Cavan and Thomas Galligan beat Dublin with the long kickout?
4 Level 5 golf shutdown: Ireland one of few countries to close courses
5 If it wasn’t for bad luck, would Stephen Kenny have any luck at all?
Real news has value SUBSCRIBE