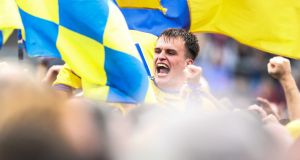 Enda Smith and Aidan O’Shea are the catalysts for their respective Roscommon and Mayo teams, and from the off on Sunday they’ll come head to head.

Big Aidan is unlikely to operate at midfield, but rather as a floating 11 with the occasional stint at full-forward, but he will be out there at the start of each half.

Tadhg O’Rourke will look to hold off Séamus O’Shea or Tom Parsons, as they do likewise, both fighting for the ground while Smith and big Aidan do battle in the air.

The two are amongst the best in the country under the throw ball. They attack it, and when they land with possession they go at the heart of the opposition. So from the off in Sunday’s All-Ireland quarter-final, winning the throw in will be a real statement of intent.

So far this summer, Roscommon have won four out of four of their throw-ins at the start of the half. Smith has caught and started an attack in all four; winning a 13m free, and scoring a point himself, although the other two attacks came to nothing after a poor final pass.

Mayo have won seven out of the 10 in the games that Aidan O’Shea has started in. O’Shea has caught five of those, and scores have come from four of the throw ins.

He has made six of their 15 marks. He’s got five points to his name and assisted 14 of Mayo’s scores

O’Shea had been the fall guy for much of the early season for Mayo, but since returning to the team he has got back to doing what he does best. Taking games by the scruff of the neck and dominating the physical exchanges. A leader, who puts his body on the line for Mayo. A rarity, for such a powerful man, he is an equally graceful footballer.

While O’Shea has been on the pitch for Mayo this summer they have won 58 per cent of the long kickouts in their five championship games, against some talented fielders such as Gary Brennan, Aidan Walsh and Galway’s tall trio. He has made six of their 15 marks. He’s got five points to his name and assisted 14 of Mayo’s scores.

I came across him for the first time when he was brought into our Roscommon minor panel as an Under-16. He’d been tearing teams apart at club level, and by the championship he had made the matchday 24. Only for an early exit to Mayo and no doubt he’d have broke into the XV. A quiet lad off the field, but when at full flow he will catch and kick points as well or better than any middle-third player in the country. One training session and you could see that.

He was a key man as Roscommon won the next two minor Connacht titles (2012, 2013). The following two years he won Connacht Under-21 titles.

At 6ft 3”, a classy two footed footballer, athletic and a great fielder; Smith was consistently played at wing forward on these teams. He plays most of his club football at centre or full forward. Previously not seen to have the engine or workrate for eight or nine. Despite having all of the obvious attributes.

This year, in the absence of a number of experienced players from the Roscommon squad, he largely operated in the half forward line again during the league (scoring 0-7 from play in seven games) but on occasion he was given a go in the middle.

Kevin McStay then gave Smith the responsibility and platform of being the main midfielder for the championship. He asked him to the lead the team, and playing on the front foot, he’s more than delivered.

Talking to one of his coaches in DCU last week, he put him in the top three players who had passed through his hands in the college

He’d frustrated some impatient Roscommon supporters up to this season. A player who constantly takes chances in possession; for some, the glimpses of magic have been overshadowed by the mistakes. Dropped for last year's Connacht final replay, 12 months later and he's the hero in Pearse Stadium.

Like O’Shea, Enda Smith has been the fall guy when things have gone wrong.

He made his senior debut as a sub in 2013, scoring 0-2 aged 19 against Mayo. Since then he’s made 15 senior championship appearances in four years, starting 10, and scoring 4-22 from play. An average of 0-3 per start. More than the odd glimpses there. He’s still only 23.

It’s actually outside of Roscommon where Smith has up to now been most well received. Talking to one of his coaches in DCU last week, he put him in the top three players who had passed through his hands in the college. High praise for a university who have had the likes of Michael Murphy, Paul Flynn, Colm Begley, Philly McMahon, Jonny Cooper and many, many more top intercounty players pass through their lecture halls.

During his time there he scored 1-3 from midfield in the Fresher’s All-Ireland final win over UCD. And was a key player as the team won the Sigerson in 2015 (scoring 0-2 in the final), and lost the final a year later.

In this year’s Connacht championship Smith has scored 0-3, made four marks, assisted three points and constantly broke tackles and carried ball as Roscommon have reached the last eight. Against Leitrim he was outstanding in attack, but the Rossies lost the overall aerial battle.

Against Galway he delivered the whole package, as Roscommon won 57 per cent of all of the game’s long kickouts. He will never be the midfielder to dictate the ebb and flow for 70 plus minutes, but his county need him to replicate that balanced performance in Croke Park. With the usual flashes of brilliance on top.

An exposed Mayo defence has been exploited by four Division two teams, to the tune of an average concession of 0-19 per game

The middle eight is the key cog in the Mayo machine - in their qualifier games they won 24 of the opposition’s 47 long kickouts, and kicked a third of their own long - while the Rossies themselves need the upper hand there to provide a quality supply of quick ball into their dangerous forwards.

If an exposed Mayo defence has been exploited by four Division two teams, to the tune of an average concession of 0-19 per game (excluding extra time) - Roscommon’s diminutive attackers will certainly have a pep in their step coming in.

The task for Smith to win midfield, and for Roscommon to stop Aidan O’Shea, will not be the one though. Fullback John McManus put in a monstrous performance marking Galway’s Tom Flynn, and he will likely be expected to do likewise against O’Shea.

Flynn is a very talented player, but O’Shea is older, even bigger, and a lot more direct. And if the Breaffy man gets a foothold on proceedings Roscommon’s supply lines will be cut sufficiently and he will raise hell down the other end.

So Smith and O’Shea mightn’t be going head to head, but whoever has the bigger impact between Mayo and Roscommon’s respective fall guy-cum hero, will prove crucial to Sunday's outcome.